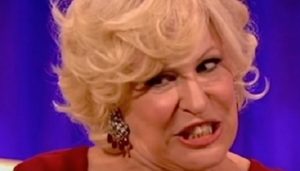 Super left-wing actress and singer Bette Midler apparently thinks cracking wise about President Trump being stabbed is a real gut buster when it comes to getting a laugh, forgetting how serious making such a statement is when it is in reference to a sitting president.

This is the kind of “tolerance” being promoted in Hollywood these days? Yikes.

Here’s a bit more from TheBlaze:

On Tuesday night, Midler shared a photo of Trump pictured at a church service that took place in the wake of the mass killing in Virginia Beach, Virginia.

The 73-year-old actress wrote, “He actually looks better here! Maybe someone in his camp can gently give him a shiv. I mean, shove.”

Despite the obligatory social media backlash, the tweet remains live on Midler’s page at the time of this writing.

Isn’t she just a class act, folks? It’s really just a mind-blower how Hollywood studios aren’t knocking down her door to try and bring her onto their best projects.

Guess that’s what happens when you become completely irrelevant in the overall culture, huh?

Making jokes about physical harm coming to the president is simply not funny. It’s unprofessional and can land you in a lot of hot water. Is it really worth it to get a few laughs or ease some of your political tension and anger?