The Intolerance of the Tolerant! 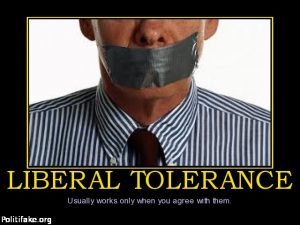 A few days ago, Democrats and LGBT groups assailed Attorney General Jeff Sessions for an off-camera, closed-door speech to an organization designated as a “hate group” by a prominent civil rights watchdog.

As announced on his public schedule, Sessions addressed a crowd at the Alliance Defending Freedom’s Summit on Religious Liberty in Orange County, California.

ABC News’ Pete Madden and Erin Galloway smeared Christians who believe the Bill of Rights secures religious liberty as a “hate group,” in an article this week. They wrote: “Attorney General Jeff Sessions delivered a speech to an alleged hate group at an event closed to reporters on Tuesday night, but the Department of Justice is refusing to reveal what he said.”

Who is this “hate group”? Alliance Defending Freedom is not a hate group at all, but a civil liberties organization that battles for religious liberty. Recognizing the need for a strong, coordinated legal defense against growing attacks on religious freedom, more than 30 prominent Christian leaders launched Alliance Defending Freedom in 1994. Five exceptional men took a leading role in forming this legal organization, and set the high standard of excellence and good stewardship that we continue to abide by today. They are Dr. Bill Bright, Larry Burkett, Dr. James C. Dobson, Dr. D. James Kennedy, and Marlin Maddoux, the former host of “Point of View” radio program. Alliance Defending Freedom advocates for the right of people to freely live out their faith.

As the news of the scheduled speech traveled, nonprofit advocacy groups and Democrats issued statements asking why the head of the U.S. Justice Department was speaking at a summit put on by the ADF, designated a “hate group” by the Southern Poverty Law Center in 2016.

The speech also prompted a statement from Democratic National Committee spokesman Joel Kasnetz condemning the Alliance Defending Freedom and Sessions’ choice to address it. “You can judge a person by the company they keep and tonight — Attorney General Jeff Sessions is choosing to spend his time speaking in front of one of the country’s leading anti-LGBTQ hate groups,”

The bottom line in today’s Western society is that anyone who believes the Biblical directive that human sexuality is a gift from God, to be shared between man and wife within the bonds of marriage, is branded “homophobic,” “hateful” or “discriminatory,” and are to be silenced by all means possible.

Tolerance is another one of those words that has been “hacked” by liberals and left-wing postmodernist.

The original and ages long meaning of our English word, “tolerance”, was being willing to put up with, endure, and bear with those whose views or lifestyles are different from others’ views, without agreeing with them. Everyone in general and Christians in particular should be tolerant in the correct and historical meaning of this word.

However, the hijacking of this term has brought about the “new tolerance” which means not only do you put up with and endure and bear with those who have different views, habits, and/or lifestyles than your own, but you agree with their views as well. Furthermore, you hold that their lifestyle is equally true and equally valid as your own and, therefore, there is no possible way that you could be intolerant, because there is nothing to be intolerant of. You must even be willing to promote and endorse that other lifestyle, since it is every bit as good as yours.

In the name of “tolerance” any intolerance of what has been historically regarded as vice and sin must be tolerated or labeled as potential “hate crimes.”

Christian bakers and florists who declined to participate in same-sex marriage celebrations have been labeled intolerant, homophobes and sued for forced compliance.

On September 9, 2014, New York Times reporter Kim Severson spiced up her obituary for Chick-fil-A founder S. Truett Cathy by tagging him “a symbol of intolerance” who presided over a “restaurant chain [seen by some] as a symbol of hate.”

David and Jason Benham, whose pending HGTV show was canceled after the “tolerant” unearthed old remarks the brothers made about their Christian beliefs on homosexuality.

The list the LGBT and other radical organizations have compiled of the “intolerant” keeps growing and is too large for any more examples in this limited space.

Hutton Gibson, the father of actor Mel Gibson, made a very insightful statement: “Tolerance is the last virtue of a depraved society. When an immoral society has blatantly and proudly violated all the commandments, it insists upon one last virtue, tolerance for its immorality. It will not tolerate condemnation of its perversions. It creates a whole new world in which only the intolerant critic of intolerable evil is evil.”

George L. Rockwell made a similar statement: “It is not the evil itself which is horrifying about our times — it is the way we not only tolerate evil, but have made a cult of positively worshipping weakness, depravity, rottenness and evil itself.”

As Christians, it is our duty, not to be hateful and demeaning of persons made in the image of God, but never to be tolerant of evil and wickedness that is bent upon destroying all that is good and godly. The God of The Bible is completely intolerant of sin. He recognizes only one way to cleanse ourselves of sin – that is to come to repentance (turning away from sin) and acceptance of the gift of salvation by grace through the shed blood of Jesus Christ on the cross. Christianity is the foundation of our Western culture. That is something we must never tolerate to be made the essence of intolerance.