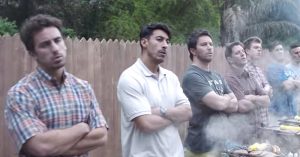 The internet has been aflutter in the wake of Gillette’s new anti-masculinity ad which basically just bashes men and whines about #MeToo.

You’ve probably seen it. I won’t bore you further with details of the misguided campaign to bash the vast majority of your customer base with the messaging that men are mean so buy our razors.

But there have been some delightfully hilarious and spot-on reactions from social media users to the dumb campaign, which we’d like to share with you now, thanks to Louder With Crowder.

“These days, a man can’t even scrape the hair off his face without enduring a political lecture from the left,” LWC’s Corey Stallings explains. “Just ask the Gillette razor company. They put out an ad calling for the havers of peens to let go of their toxic masculinity and embrace their feminine side. It ain’t going over so well.”

The reactions speak for themselves:

Hey @Gillette, I have an idea, stay out of politics. Real men already stop other guys from acting badly. A razor company should want me to shave with your product. And, btw, I'm extremely masculine. And there's nothing wrong with that. #TheBestMenCanBe

And here we are at the bottom line right away. The world is full of men behaving the best they can, and these men have build civilizations and defend human life and dignity every day.

The left doesn’t want men to be the best men can be, it wants men to stop being manly because soy boys feel intimidated by actual masculinity. Sorry, guys, real men don’t care if their manliness hurts your feelings.

Women weren’t thrilled by the ad campaign either, though:

Massive FAIL. Get in the bin, you virtue signalling dolts. pic.twitter.com/r0EoBOghpN

Some viewers found a useful way to use the product to combat toxic masculinity, though:

This young lady made a good point about the demographic Gillette was likely to appeal to with their ad campaign:

Gillette was obviously trying really hard to be politically correct with this campaign, but there’s one massive fail they clearly missed:

They say Gillette is the best a man can get but who are they to assume his gender?

Of course, one doesn’t have to be snarky to totally dismantle this idiotic campaign:

the only ones lauding the Gillette ad work in media/advertising. everyone else sees it for what it is: a smarmy, condescending virtue signal aimed at the hardworking decent men they been price-gouging for years.

Well, I’d say that just about sums it up.