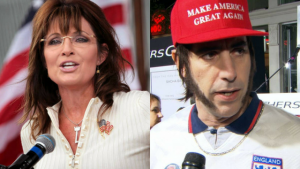 Sacha Baron Cohen, the comedian of “Borat” and “Ali G” fame, is well-known for the hilarious, and often highly controversial, in-character interviews he arranges for his documentary/mockumentary mash-ups.

But Sarah Palin recently took to Facebook to rebuke him for the manner in which he cajoled the former vice-Presidential candidate into an interview, which absolutely did cross a serious line.

He posed as a wounded veteran.

It is true that comedy should be absolutely separate from political correctness and even possibly decency. It’s really, really hard to be funny if you’re always worried about offending people.

But in an age where Roseanne’s entire career was pulverized with one off-color joke and far-left talk show host Bill Maher is rejected by his own for refusing to bow to the gods of political correctness, it’s important to distinguish between brutally jokes and just plain shameful behavior.

A joke is one thing. A carefully constructed deceptive set-up that appeals to someone’s compassion for wounded veterans is entirely another, in my humble opinion.

“I join a long list of American public personalities who have fallen victim to the evil, exploitive, sick ‘humor’ of the British ‘comedian’ Sacha Baron Cohen, enabled and sponsored by CBS/Showtime,” Palin wrote on Facebook.

She explained she had traveled across the country for what she believed was an opportunity to “‘honor American Vets and contribute to a ‘legit Showtime historical documentary.’”

There, Cohen was heavily disguised, right down to the wheelchair, and Palin was subject to “what I was led to believe would be a thoughtful discussion with someone who had served in uniform,” that turned out to be “a long ‘interview’ full of Hollywoodism’s disrespect and sarcasm – but finally had enough and literally, physically removed my mic and walked out, much to Cohen’s chagrin. The disrespect of our US military and middle-class Americans via Cohen’s foreign commentaries under the guise of interview questions was perverse.”

She then dared Cohen to air the footage, telling “shallow Sacha boy” (ouch!) that “Experience tells us it will be heavily edited, not pretty, and intended to humiliate.”

While many might say it’s hypocritical to advocate for people on the right to have free speech while criticizing left-wing comedians who stoop to this level, on the contrary: this is exactly why we need free speech.

So that people who are willing to go this low can not only show their true colors, but also be called out by the people they deceive and disrespect. I hope Showtime goes ahead and airs the “documentary” too, and that the free market lets Cohen know exactly what Americans think of his mockery of our veterans.