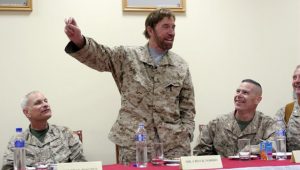 The man, the myth, the legend, Chuck Norris, an outspoken Christian conservative, who is renowned for his martial arts films and for all of those hilarious “Chuck Norris jokes,” is backing an idea to fund the border wall that is absolutely genius.

On Sunday, Norris penned a piece for WND, formerly known as World Net Daily. In the piece, headlined “An incredible solution to building the border wall,” Norris backs a proposal to have Mexico’s biggest drug lord fund construction of a barrier on the U.S.-Mexico border.

“I have written many articles over the years, but I have never written an article more important than this one. While Democrat and Republican leaders in Washington are polarized and in gridlock over how to pay for a wall on the U.S. southern border with Mexico, U.S. Sen. Ted Cruz (R-Tex.) is a Lone Ranger with a Tonto-sized idea riding into town to get the job done in a way that would cost taxpayers nothing at all,” he writes.

Cruz put out the proposal in April 2017, but it’s been forgotten (at least until Chuck Norris got his hands on it). Cruz wants “El Chapo” (real name Joaquin Guzman) to forfeit his $14 billion in assets to the U.S. government, which could then use the money for the barrier.

“Fourteen billion dollars will go a long way toward building a wall that will keep Americans safe and hinder the illegal flow of drugs, weapons, and individuals across our southern border,” Cruz said in a statement at the time. “Ensuring the safety and security of Texans is one of my top priorities. We must also be mindful of the impact on the federal budget. By leveraging any criminally forfeited assets of El Chapo and his ilk, we can offset the wall’s cost and make meaningful progress toward achieving President Trump’s stated border security objectives.”

The senator’s bill is known as EL CHAPO, which stands for the Ensuring Lawful Collection of Hidden Assets to Provide Order (EL CHAPO) Act.

Is Sen. Cruz’s EL CHAPO Act not a brilliant idea to fund the border wall between the U.S. and Mexico? And guess what? A Mexican pays for it after all – one evil hombre who has repeatedly raped America’s communities and the souls of precious millions through narcotics and other criminalities for the past three decades.

Think of the impact passing the EL CHAPO Act could have. First, El Chapo’s drug monies could fully fund the completion of the entire U.S. southern border wall without a single dime more from the federal government or American taxpayers. Second, simultaneously the majority of El Chapo’s own drug trafficking into our country would be greatly diminished using his own monies. Third, president Trump could fulfill his primary campaign promise. Fourth, the Democrats would be able to open their government the same day the EL CHAPO Act passed.

Let it be clear: Passing that single bill could be the compromise they all are looking for, and it is the best win-win-win-win solution the Congress and president could ever enact!

Norris is right on this one. This bill is a great compromise that doesn’t drain money from taxpayers, which means it’s a win for everyone.

The bottom line is we need a more secure border. A nation without borders is not a nation at all. We have a limited amount of resources in America, and those resources, should first and foremost be for citizens who contribute to the system.

This, of course, isn’t just welfare programs, because we all know those need to be scaled down, regardless of illegal or citizen recipient. It’s also jobs.

Let’s hope folks hear out Sen. Cruz and give his idea some thought.