The Green No Deal is Present! 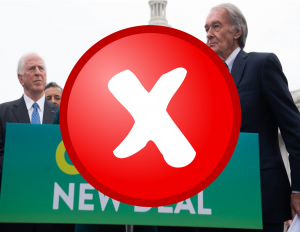 Majority leader Mitch McConnell girded his loins and brought Boss Lady AOC’s Green New Deal to a vote on the Senate floor earlier this week. With imminent doom towering over not just the nation, but the entire world, the action came just in the nick of time. Immediate and unanimous passage was assumed, of course, since the science is settled and the public overwhelmingly supports the plan. However, something funny happened on the way to all-out socialism.

Apparently, the Green No Deal might not be as popular as CNN claims. It seems that some Americans aren’t comfortable completely dismantling the federal government, the economy, and Western civilization in general so society can be rebuilt to suit leftist sensibilities. It’s not that anyone questions the media’s veracity or the intentions of our politicians, of course; it’s just that change is a scary thing.

While it’s not perfect, the Constitution has done a pretty fair job keeping things in order for two-and-a-half centuries, so it’s understandable that some folks are hesitant to just toss it out the window. After all, ignorance often causes people to be overly cautious. So does the lack of a moral compass.

Fifty-seven Senators, including four Democrats, voted nay. The other forty-three Senators, including six 2020 Presidential hopefuls who have all declared their support of the Green No Deal, voted present. They were afraid their vote, either yea or nay, might be used against them in 2020, so they ducked the issue altogether. Their failure to take a stand – one way or the other – tells us a lot about these elected “leaders”.

According to its supporters, failure to pass the Green No Deal will lead to mass extinction just twelve short years from now. On the other hand, anyone with an ounce of commonsense knows its implementation will cause economic devastation not just in the U.S., but around the world. Those are extreme consequences that must be addressed with courage and unshakeable leadership if we’re going to survive as a nation. Voting present demonstrates an absolute lack of either quality.

Still, though, the ability to avoid responsibility while still looking respectable has a certain appeal. Too often, poor primary choices leave voters holding their noses while picking the lesser of two evils. Being able to vote present in general elections would let We the People tell every candidate exactly what we think. Even better, we could all get one of those way-cool “I Voted” stickers without having to commit to any choice. Talk about a win-win!

Roy Jeffords is an author, ghost writer, Constitutional conservative, and curmudgeon-at-large. A graduate of The Citadel, the Military College of South Carolina, he lives in Texas with his wife and their two boxers. Find him on Facebook at Roy Jeffords, Twitter @commonsensecurmudgeon, and at www.royjeffords.wordpress.com. Contact him at [email protected].