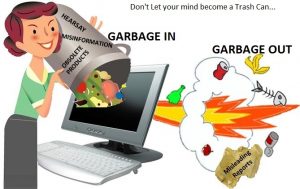 One of the primary factors contributing to this increased perversion and idiocy is the GIGO factor. (GIGO stands for “garbage in, garbage out.” The term originated in the field of computer science where flawed, or nonsense input data produces nonsense output or “garbage.”

Today GIGO is the universally accepted warning for the behavior of any system or process, including the human thought process.

Just as with a computer, what goes into the mind determines what comes out in words, actions, and attitudes.

Stated another way, what you see you will be. What you look at longingly and lustfully, you will become like. Also, what you hear constantly, whether healthy or harmful, you will heed eventually. There is an incredible, transformational power in what we set our eyes, ears, mind and heart on.

Millenials spend 39.7 hours weekly listening to music. One can only wonder how much is “garbage”?

In their lifetime, Americans, on average will spend 7 years and 8 months of their lives watching television.

Several years ago, The American Psychiatric Association stated that by age 18, a U.S. youth will have seen 16,000 simulated murders and 200,000 acts of violence. Is it any wonder that over 1000 studies, including one by the Surgeon General as far back as 1972 have shown a connection between media violence and aggressive behavior in children? In light of this reality what do you think will be the consequences of the avalanche of images that glorify drug use, gang activity, sexual aggression, gambling, etc? People become like what they set their minds, hearts and eyes on.

Zig went on to say, “From the neck down, very few people are worth more than $100 a week. From the neck up, there is no limit to what an individual is worth. So what do we do? We feed our stomachs, the $100 part below our necks, every day. How often do we feed our minds, the part that has no limit to its value, earning and happiness potential? Most of us feed it accidentally and occasionally, if it’s convenient or we don’t have anything else to do.”

Remember, the GIGO Factor is always operative in our lives!