The “Gender Pay Gap” In Women’s Soccer Has Been Debunked. Take A Seat. 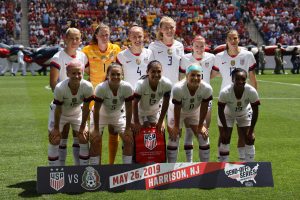 By way of preface, neither I nor a single person in my family as far back as Ellis Island are interested in sports. Except for my Dallas-born mother-in-law, who never failed to clear her calendar when the Cowboys were playing, bless her.

I do, however, enjoy economics, and I love fact-checking, which two forces bring me to the controversy du jour: the mythical “gender pay gap” in women’s sports, particularly in the FIFA Women’s World Cup championships.

There is a whole lot of squawking going on after the U.S. team was reportedly paid far less than the men’s team for winning the World Cup and, naturally, the only reason why anyone can conceive that such a “pay gap” might exist is due to pure, unbridled sexism. And, of course, it doesn’t help anyone that the mainstream media typically refers to “the gender pay gap” as though it is a factual, empirically-observed force, rather than just a sociopolitical theory based on selective reporting of statistics.

The fact that complaints of a pay gap in women’s soccer are virtually the same one shouted from the rooftops when the U.S. women’s team won back in 2015 tells me that it’s time folks stop, take a minute to breathe, and read up on the facts before whining about something that, as far as empirical evidence shows us, does not exist.

The Daily Wire’s Matt Walsh brilliantly sums it up:

First, we should clarify a crucial point. You’ve probably heard that the women should be paid more because they’re better and they earn more revenue. Both of those claims are extremely misleading. It’s true that the women’s team is more successful against women than the men’s team is against men. That does not mean that the women are actually better players. Keep in mind that the U.S. women’s team lost to a bunch of 13- and 14-year-old boys a few years ago. If they couldn’t beat adolescent boys, they can’t beat grown men.

As for revenue, historically U.S. men’s soccer has generated more revenue than U.S. women’s soccer. That gap has closed in recent years, and now the women generate slightly more than the men — though this only takes into account ticket sales, not TV deals and merchandise. But the pay gap in U.S. soccer is not nearly as large as advertised. The highest-paid female soccer players in this country are paid almost the same as the highest-paid male soccer players. The pay gap in U.S. soccer only widens among the lower-tier players.

The top stars on women’s teams, as The New York Times admits, are already on a very similar pay scale to their male counterparts:

According to figures provided by U.S. Soccer, since 2008 it has paid 12 players at least $1 million. Six of those players were men, and six were women. And the women hold their own near the top of the pay scale; the best-paid woman made about $1.2 million from 2008 to 2015, while the top man made $1.4 million in the same period. Some women in the top 10 even made more than their male counterparts over those years.

But what about the World Cup payouts? After all, that’s the issue that had fans chanting, “equal pay!” from the stands and, at face value, the numbers do look rather damning.

FIFA, the international soccer organization, shells out roughly $400 million to male players in the World Cup, while female players will only receive around $30 million. Now, I’m only a couple of IQ points above a possum with a head injury, but I think one of those numbers is a lot bigger than the other. What about that pay gap?

It seems that the folks condemning FIFA, especially Megan Rapinoe, can math good too, and they decry the organization and its president every chance they get.

As Walsh points out, though, these people aren’t fuming just because they want to see equal pay in U.S. soccer (we already have that), “They want it internationally, where the pay is definitely not close to equal.”

But, as my dear, sweet Forbes explains, the seemingly astronomical pay gap is entirely due to the disparity in revenue:

In short, men rake in $6 billion, women just $131 million. Again, one of those numbers is a lot bigger than the other. If you need help, one starts with a ‘b’ and the other starts with an ‘m’.

It’s okay, I know, math is hard. Let’s just do a little more math to get to the bottom of this and you can go ahead and move on to the next outrage.

If the women were paid the same total as the men — $400 million — they would be making nearly four times more than they generate. The men make 7% of their revenue. The women apparently want 400% of theirs. That’s absurd, obviously, to say the least.

Megan Rapinoe, humble as always, will settle for just a meager quadrupling of their prize money. But $30 million quadrupled is $120 million. That would be close to 100 percent of their revenue. Again: The men only make 7%. Already, the women are earning around 20%.

So, if you actually, you know, look at the numbers, you’ll see that a gender pay gap actually does exist—but in the women’s favor.