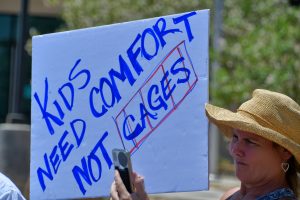 How exhausting it must be to be a Democrat these days.

To fit in with your party, you have to oppose and obstruct your own President at every turn which is already tiresome enough, let alone the effort it takes to ensure your criticisms are, you know, actually based in fact and not just the product of a partisan telephone game.

It must be torture, and that’s why seemingly so few anti-Trump Dems bother to fact-check themselves before airing their grievances for all the world to see.

Lucky for us onlookers, however, egg-on-face is always a hilarious sight, and the House Oversight Committee Democrats have got it big time.

After posting some poorly designed memes ahead of a “kids in cages” immigration hearing, it was discovered that the photos the House Dems used in their memes weren’t taken during Trump’s presidential term.

But the tweet included a photograph taken by The Associated Press in 2014, during the Obama administration, showing migrants in detention in Arizona. The Trump campaign flagged the soon-deleted tweet and noted the image comes from a time when current Democratic presidential primary front-runner Joe Biden was vice president.

“House Democrats are promoting their ‘civil rights’ hearing on ‘kids in cages’ and ‘inhumane treatment’ with a photo from 2014, when Joe Biden was Vice President,” the tweet read. “So dishonest!”

According to The Daily Caller, House Democrats then put up a new tweet with a different photograph — also, it turns out, from the Obama administration years. That tweet was soon deleted as well, after it was noticed by their Republican counterparts on the committee.

“You all know that’s a picture from 2014, right? Remind us who was President then,” the tweet said.

Oh my word, that was glorious.

Political commentator Caleb Hull deftly nabbed screenshots of the original tweets before they were silently deleted.

LOL @OversightDems just deleted this tweet from July 2 after @GOPoversight called them out for using a 2014 picture on that one too pic.twitter.com/PrIcNBttcH

The @OversightDems just deleted this tweet featuring a graphic placed over a photo of kids in cages at the border.

The only problem is that the photo was taken in 2014 while Obama was in office. pic.twitter.com/ApHhgtIaVk

Even AP took a shot at fact-checking the House Dems on this one:

“The photos, taken by The Associated Press, were from 2014, during the Obama administration, but were presented by liberal activists as if they showed the effects of Trump’s immigration policy now.”https://t.co/9x3F7VYUTz

Of course, the current narrative pushed by the Dems doesn’t allow for the reality that they stood around picking their noses while denying aid to those dealing with the “manufactured crisis” until the Dept. of Health and Human Services ran out of money to house, feed, and care for a massive wave of illegal immigrants and asylum-seekers while they wait for the gears of our immigration system turn.

Democrats are and have been using these migrant children as political props. They spent nearly two months wringing their hands while HHS was running out of money for the unaccompanied alien child (UAC) program. They went to Clint, TX to lie about @CBP. They. Do. Not. Care. pic.twitter.com/53teuTVBQx