The DOJ Has Opened Up Criminal Inquiry Into John Bolton Book 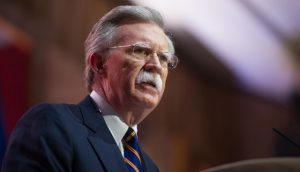 The Justice Department has now opened up a criminal inquiry into whether or not former national security adviser John Bolton might have unlawfully disclosed classified information in his recently released book.

A grand jury met and issued subpoenas to obtain communication records from publishing company Simon & Schuster who published The Room Where It Happened: A White House Memoir, according to multiple reports released on Tuesday.

The Washington Examiner reached out to the Justice Department, the Office of the Director of National Intelligence, and Bolton’s attorney for comment.

Prior to the late June release of the book, which painted an unflattering picture of President Trump, the Trump administration sought to stop the release of Bolton’s book in court but was denied by a federal judge, who noted that multiple news outlets had already reported many details from it.

President Trump has been a target by folks like Bolton for a long, long time. This has led some to believe that perhaps Bolton is a part of the “Deep State” plot by government actors on the inside of the administration who are working to undermine anything and everything Trump tries to accomplish.

Then again, the book from Bolton could just be his way of lashing out at the president for booting him to the curb. Hopefully, this investigation will provide answers on the whole matter.