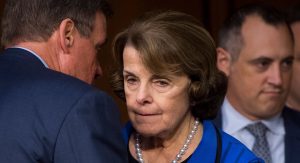 It has been astounding to watch over the last three weeks as the Democrats enact a campaign of complete and total destruction against Kavanaugh, attacking at every angle.

The man who’s worst offense seems to be having been appointed to the SCOTUS by President Trump just before the crucial November midterms has had his name dragged through the mud, broken glass, and hot coals, while his wife and children have their lives threatened by unhinged Democrats.

It seemed like Kavanaugh passed the point of no return after testifying, when Democrats, after subjecting him to awful, unsubstantiated accusations, they claimed the way he defended himself showed he wasn’t fit for the court.

Anything to say he wasn’t fit for the court.

Unfortunately, it seems the ruthless, desperate Democrats may have very well overplayed their hand.

While clueless left-wing celebrities scream in the streets of Washingon DC and Democrats complain about the findings of the very FBI investigation they’ve been demanding for weeks, Republicans are seeing a sudden spike in the polls as regular people react to the treatment of Kavanaugh.

The latest IBD/TIPP poll finds not only that President Donald Trump gained four points in his approval rating, and 7% in the exclusive Presidential Leadership Index. But the Democrats’ 11-point advantage in the generic ballot has been all but vaporized. It’s now down to 2 points, with just a month to go until the midterm elections.

Our poll isn’t the only one showing the public recoiling at the sorry spectacle put on by the Democratic Party.

An NPR/PBS/Marist poll finds that enthusiasm for the November midterm elections has skyrocketed among GOP voters. The share of Republicans who say the elections are “very important” shot up 12 points since July, and now closely matches Democrats.

(The IBD/TIPP Poll asked this question for the first time in our current poll, and showed similar results.)

Since mid-September, the Real Clear Politics average of polls showed Trump’s approval climbing more than three points. Democrats’ advantage on the generic ballot question has dropped from 9 points to 7.7 points (and that was before IBD’s number made it into the RCP average).

Meanwhile, the National Republican Congressional Committee reports that its small-dollar donations surged 175% over the past week, compared with the same time in the previous month.

What this all boils down to, like Trump’s election in the first place, is that no matter how much noise the media and loud, leftist celebrity armchair activists make, the average person remains unconvinced by propaganda.

Americans are quickly losing their trust in the fake news media and the Democratic rhetoric….which have become one in the same.