The day after Alabama 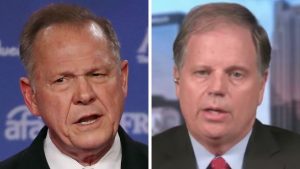 There was an election in Alabama last night. Yeah I know this is old news as of this morning, but I wanted to put out my initial thoughts on the entire debacle that is politics in our country currently.

I observed over the past month a media apparatus that was hell bent on taking down a rip-rock conservative that believed deeply in the bible and constitution. Along with that an establishment republican party working for their donors and against the great people of this country.

Now, here are my thoughts.

So let’s break these down one at a time.

Citizens of this country have a responsibility to vote. It is shameful that out of 4.87 million people only 1.2 million or so voted. I’ve been covering politics now with my radio show for the past 4 plus years and have talked about how little turnout we receive during voting. It is beyond comprehension that people would not vote, yet will be the first people to complain about the current state of this great union.

I listen to people complain about how government is intruding in their lives and that they wished things would be different. I’ve listened as people have complained that the government isn’t spending their money well or that government oversteps its authority but then only turns out 25 percent of the population to vote.

We talk about not discussing politics and religion during the holidays, yet these two subjects are the most important things that we face in today’s world.

Alabama was won by Donald Trump in the last presidential election. Trump won by over 20 points. The question that needs to be asked this morning is. Where were all of the republicans that voted for Trump last night?

We are at a crossroads in this country and had a razor-thin margin in the Senate 52-48. That razor-thin margin is now 51-49. We have an economy that is back to producing jobs. The stock market is at record highs and we are currently trying to pass tax reform to put more money in your pocket. Roy Moore was a much needed candidate for these purposes.

The media today is telling you that Steve Bannon was the reason Roy Moore lost. They want to hang this loss around the neck of President Trump and Bannon. The media needs you to think that the policies of the Trump presidency are hurting this country. Even though, the economy is growing at three plus percent. That unemployment is down, that food stamp usage is down and the job market is the best it has been in the past 10 years.

Where do we go from here?

The loss of a Senate seat in Alabama is huge for the conservative movement. As conservatives we have a lot of work to do. It is our responsibility to hold our government accountable. We just elected a Democrat Senator in the state of Alabama that believes babies should and could be killed just days before they are born. We just elected a Democrat Senator in Alabama that believes that illegal aliens should have the same rights as you and I and that a border wall would be a waste of money. This is the person we just sent to the Senate.

What will it take to make you act?