The Clintons Are Among Notable Electors Casting Vote For President 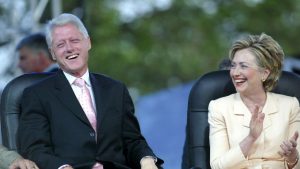 The 538 Electoral College presidential electors are meeting in state capitols today all across the United States to cast their votes for Joe Biden or President Donald Trump.

There are some pretty high-profile names in the political realm who will be casting these votes, including former President Bill Clinton and his blushing bride, Hillary Clinton, the failed 2016 Democratic presidential candidate who will forever be known as the one person so awful she lost to a reality television star that was supposed to be an easy victory.

That’s not to slight Trump. The man turned out to be a stellar president. One of the best we’ve had in a long, long time.

Rules vary by state, but the electors are generally chosen by state parties and pledge to vote for that party’s nominee for president. If a party’s candidate wins the popular vote in a given state, its electors cast the Electoral College votes for that candidate. Biden is set to clinch the Electoral College and become president-elect by a 306-232 margin over Trump, based on results in the Nov. 3 election.

Hillary Clinton, New York (Biden)
Had the former secretary of state won the 2016 presidential election and sought reelection, it would likely have been her that the New York electors voted for rather than Biden.

Andrew Cuomo, New York (Biden)
The New York governor gained both national acclaim and criticism for his handling of the coronavirus pandemic in New York and is a rumored contender to be Biden’s nominee for attorney general.

You can almost guarantee that Hillary is especially getting a thrill out of being able to cast an Electoral College vote against Trump. It’s about the only real revenge she’ll ever be able to get against him for trouncing her in the election four years ago.

However, we all know that Hillary was involved in helping put together the Steele Dossier that was used as fodder against Donald Trump to try and prevent him from becoming president and was also used after he was in office to try and thwart his administration.

Hillary failed there too.

So much fail. That’s got to be depressing.