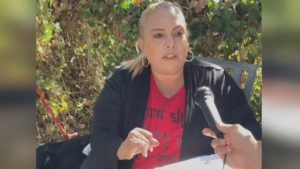 Yeah. That’s right. Voter fraud did actually happen in this election, no matter what leftist media is telling you. The real question we have to ask at this point is how widespread this phenomenon actually was, which can only be answered if someone actually conducts an investigation of the allegations.

The warrant for her arrest included illegal voting, unlawfully assisting people voting by mail, and unlawfully possessing an official ballot, all of which are felonies in Texas.

Rodriquez’s alleged actions were put on the radar of Texas officials in October, following a video release by James O’Keefe’s Project Veritas. In the video, the alleged political consultant details election illegalities and admits that she knows what she’s doing is illegal and could send her to the slammer.

If convicted, Rodriguez is looking at up to 20 years behind bars.

“Rodriguez was exposed in a Project Veritas video last fall while she engaged in vote harvesting leading up to the 2020 election,” the release went on to say. “The Election Fraud Division of the Office of the Attorney General reviewed dozens of hours of unedited, raw footage, which led to this arrest. In an uncharacteristic moment of honesty, Rodriguez acknowledged on video that what she was doing is illegal and that she could go to jail for it. If convicted, Rodriguez could face up to 20 years in prison.”

“Many continue to claim that there’s no such thing as election fraud,” AG Paxton continued to say. “We’ve always known that such a claim is false and misleading, and today we have additional hard evidence.”

“This is a victory for election integrity and a strong signal that anyone who attempts to defraud the people of Texas, deprive them of their vote, or undermine the integrity of elections will be brought to justice,” the statement read.

Paxton is absolutely right. This is a huge victory for every single individual who has been trying to get folks to actually examine real evidence of voter fraud in the recent election. You can’t just shrug this off. We have real evidence that resulted in a real arrest.

Could something like this have happened in other parts of the country during November? You better believe it could’ve. But we can’t know that if courts and judges don’t actually look at the evidence.