Texas Sheriff Has Change Of Heart About Arresting Migrants; Here’s What Changed His Mind 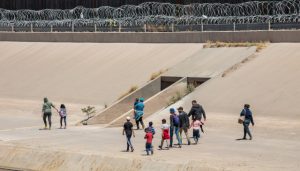 A border sheriff in the state of Texas has apparently changed his mind about arresting illegal migrants who have committed trespassing violations after a sudden spike in crime in his area, going on to state he will now work with state officials to apprehend these individuals.

Tom Schmerber, the Maverick County Sheriff, had originally decided against participating in Gov. Greg Abbott’s effort to arrest migrants on state charges because he didn’t believe that Texas police and courts had jurisdiction over federal immigration law.

“The state’s been after me for a few months,” Schmerber said during a chat with the Examiner. “I hesitated for about two months. What kind of pushed me to really was because there were more things that were happening.”

“I didn’t see migrants coming in and just moving on. I saw immigrants get into houses, breaking in, damaging, taking things. I started getting calls from ranchers about all the damage they were doing — calls from neighborhoods close to the city about breaking in, taking things,” he continued.

Schmerber also cited a recent incident in which a Honduran man broke into the home of a 73-year-old woman and sexually assaulted her.

U.S. border authorities encountered more than 259,000 people who illegally attempted to cross the border in the Del Rio region, which includes Maverick County, during fiscal year 2021 that ended in September. About 40,000 people were encountered the previous year.

Abbott, R-Texas, in July ordered the National Guard to help local law enforcement with arresting migrants who break state laws, such as trespassing, amid the current border crisis.

“If somebody goes onto a ranch and they jump the fence, that’s going to be a state charge now because of trespassing,” Schmerber went on to tell the Examiner. “If they go into a house, they’re going to have another charge for breaking into private property.”

Migrants and drug smugglers who get busted trespassing on private property will then be prosecuted by the county attorney on the misdemeanor charge of criminal trespassing.

Drug and human smugglers could also face additional charges aside from the one mentioned above.

“Schmerber was awaiting the official go-ahead to begin arresting illegal immigrant trespassers and referring them for prosecution, the Examiner said,” Newsmax reported. “One reason Schmerber did not partner with the state initially was a concern about Maverick County’s limited jail space amid the COVID-19 pandemic.”

Detainees will now be taken to an outdoor processing facility in Val Verde County before being sent over to a county jail located in Dilley, Texas.

“As part of its agreement with the state, Maverick County will receive $1.6 million to cover additional border security-related costs,” the report says, adding, “Schmerber told the Examiner he planned to spend the money hiring more deputies, vehicles, and equipment.”