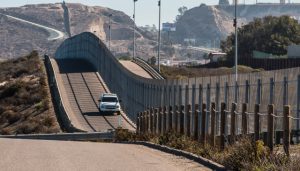 According to Texas state Rep. Brian Harrison, who once served as the chief of staff at the U.S. Department of Health and Human Services while Trump was president, said that Texans are proud of the state government for building a wall along the border, even if it ends up costing taxpayer dollars.

“I think Texans here are proud to see their government standing up and doing what the federal government is being completely derelict in doing,” the Texas Republican went on to say during a conversation on Newsmax’s “Wake Up America.” “It’s unfortunate that we’re in the situation. We shouldn’t be. It’s one of the few powers [that are] enumerated to the federal government.”

When President Joe Biden came into office, “he inherited the most secret border in history,” Harrison added. “The problem is, he came in and intentionally created the Biden border crisis, stopped construction of the wall. We here on the border here in Texas are the ones who are most impacted and the ones who were the first impacted.”

The state is expected to break ground on the permanent border wall this week, according to Land Commissioner George P. Bush, the grandson of former President George H.W. Bush.

“Reallocating resources to secure the border,” however, is “something that we need to do,” Harrison went on to say. “It’s unfortunate that we’re here but I’m very proud to be part of the state that is stepping out and fighting back against the federal government’s inaction on the border.”

The lawmaker added that the border is the main issue in Texas among voters.

“It’s our economy, it’s public health, it’s national security, it is jobs,” he continued, going on to add that residents are now being victimized by a serious increase in crime.

“These are not victimless crimes here,” the state congressman said. “People’s lives are being affected. Their communities are being affected, and I’ll tell you there’s probably been no greater marketing campaign for the drug cartels, the human traffickers, the coyotes, than the Joe Biden open border policies that he’s enacted.”

Biden’s policies, he added, are “inhumane” as they incentivize people to make “incredibly treacherous and dangerous journeys from Central America. When they get to the United States, thousands of children are being put in facilities that are meant to hold 200 or 300 people.”

Building a border wall for the security of the country is the one legitimate job of the federal government. And yet, they’ve seemingly dropped the ball and have done nothing to solve this issue.

Maybe it’s because Biden’s administration doesn’t want to end this crisis, because he plans on using it to fluff up the Democratic Party voter rolls?