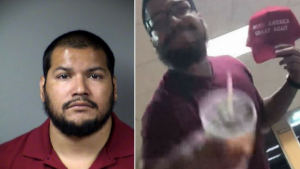 This week, a Trump-hating Texas man learned the hard way exactly what happens when you can’t pick on someone your own size.

30-year-old Kino Jimenez, upon seeing 16-year-old Hunter Richard, who was committing the sin of wearing a MAGA hat while eating with his friends at Whataburger in Universal City, Texas, proceeded to verbally assault the teenager, throw a drink in his face, rip the hat off his head, and walk off with it.

In the viral video of the incident that Richard captured, he and his friends are clearly stunned as the man walks off.

Another Trump supporter attacked in a restaurant for wearing a MAGA hat. The perpetrator is a latino American by the name of Kino Jimenez. The incident took place in What-A-Burger, a restaurant located in San Antonio, TX. His employer Rumble terminated Kino on Facebook. #walkAway pic.twitter.com/66S3gRvqdD

It didn’t take long for police to track down Jimenez, who was promptly arrested.

In the video, a man identified as Jimenez grabbed Richard’s hat and then threw a drink on his face. He then walked away with the hat, cursing at Richard.

Police said Jimenez would be charged with theft of a person, a state felony.

Jimenez was also fired from his part-time job. Rumble, a San Antonio bar and Jimenez’s former employer, released a statement condemning Jimenez’s actions and affirming that “THIS BAR IS A SAFE SPACE FOR EVERYONE!”

Whataburger also released a statement after the incident. “We were shocked to see this video,” it said, “and certainly don’t condone this type of customer behavior in our restaurants.”

Richard told a local news outlet he thinks “a conversation about politics is more productive for the entire whole rather than taking my hat and yelling subjective words to me.”

The incident caught the attention of one of Trump’s sons, Donald Trump, Jr. He tweeted that “No one should feel unsafe supporting their President.”

This guy is a fool. No real man would assault someone literally half their age over something as stupid as a hat, with so little concern for the obvious repercussions.

This is exactly why so many people are walking away from the Democratic party. The left thinks they’re bolstering their cause by advocating for public harassment of Trump supporters, but they’re just creating a culture in which only the most radical and vitriolic can have a voice.

The rest of us have to live alongside those of varying political ideology and guess what, we’re sick and tired of the lines in the sand.

At the end of the day, whether you voted for Hillary or Trump or neither, we’re all American, and as we celebrate our Independence this week, there’s no better time to brush off the values we all have in common, like pluralism, free speech, and basic decency.