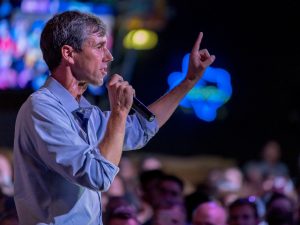 As much as some folks would like to have us believe that Texas is a swing state, fine folks like Texas Lt. Gov. Dan Patrick aren’t going to let the state go blue on their watch.

In a statement on Tuesday, Patrick rejoiced over presidential candidate and former Rep. Beto O’Rourke’s (D-TX) failed bid for Senate on Tuesday and shredded his demand for a gun confiscation program.

“Hell yes, we’re going to take away your AR-15, your AK-47,” O’Rourke said, making no bones about his desire to empower the federal government to steal millions of firearms from law-abiding citizens at the latest Democratic primary debate. “We are not going to allow it to be used against our fellow citizens anymore.”

“When I heard Beto’s now infamous statement in the debate last week … my first thought was thank God he lost to Ted Cruz,” Patrick wrote in a statement on his website. “Because the Texas press never asked him any serious questions in that race, it wasn’t clear until now what a radical left-winger he is – the most radical of all the looney leftists and socialists currently running for president.”

“My second thought was he will never be a threat to Texas politics again,” he continued. “He’s stuck in tiny single digits in the polls, so he’s not going to be president, but now the Democrats can’t even put him on the ticket with the hope that he will help win Texas. He’s a gun confiscator – he’s done in our state.” [emphasis added]

“Now he’s selling T-shirts with his ‘hell yes’ statement – another flailing attempt to hide his naked ambition and distract from his doomed campaign,” Patrick said. “Beto says he has talked to people in Texas who own AR-15s and they support his confiscation plan – so he found some liberal who agrees with him. It’s a big state, but the people I talk to don’t want to give up their guns. They know it is the evil intentions of a shooter, not the gun that is a threat to our safety.”

“I will never support banning the AR-15s, AK-47s, or a phony buyback program – the government can’t buy back something they have never owned,” he continued. “This is what our Second Amendment rights are about – making sure the government can never take away our guns.”

According to The Washington Times, Alpha Dog Firearms owner Matt Boggs now sees Beto as a “good friend” after his debate rhetoric sparked customers to flock to his shop for $349.99 ARs which, if you don’t know, is an absolute steal.

“I saw the comments that he made, and I was kinda like, ‘You know what: the hell with this guy,’” Boggs said.

I second that emotion. MOLON LABE.