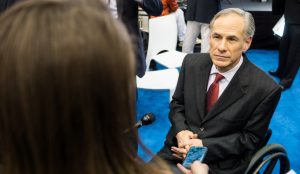 According to Texas GOP Gov. Greg Abbott, the Lone Star State is ready to take things into their own hands concerning the border crisis, having issued a disaster declaration because he feels “the Biden administration has abandoned it.”

“They’re completely ignoring the crisis on the border, and because of that, as governor, I am having to step up and do the federal government’s job,” Abbott told  “Greg Kelly Reports” during an interview on Wednesday.

“We are going to instill safety. We’re going to be doing things in Texas that no state has ever done before when it comes to cracking down on anybody coming across the border. We’re going to step up and secure the border even more than we already are,” the governor added.

Abbott went on to tell host Greg Kelly that he’s already deployed over 1,000 Texas Department of Public Safety officers, along with members of the National Guard.

“We’re going to ratchet up our efforts along the border to make sure we help secure our state and our country,” Abbott promised.

Abbott then added that he thought U.S. Homeland Security Secretary Alejandro Mayorkas “seems to live in a different universe.”

“He says the border is secure,” the Texas governor lamented. “It would be outrageous, but it sounds bizarre and crazy, because they literally have no idea. And I can’t tell if they’re just trying to disinform the public or they really don’t know. But they have no idea [of] the magnitude of what’s going on at the border.”

Abbott noted that neither President Joe Biden nor his border czar, Vice President Kamala Harris, has visited the border, adding that Mayorkas has merely “flown by.”

“There’s a problem at our border that’s killing people across the country, and that’s the amount of fentanyl that the cartels are coming across the border with, just this year alone, the first four months of this year,” Abbott said, noting the human trafficking that’s being done by Mexican drug cartels along with drug trafficking. “There’s enough fentanyl at the border, apprehended by the Department of Public Safety, to kill every man, woman and child in the entire state of New York.”

“Biden’s border policy is deadly dangerous across the country, and they are ignoring that danger,” he said.

Abbott also denounced counties in Texas “trying to create their own election laws” in the last presidential election, making election integrity reform much needed in his state.

“That’s exactly why we’re passing the election integrity reforms that we are — to rein in counties that are not going with the law passed by the state legislature, which is the mandate in the United States Constitution,” Abbott said, echoing the objections of the Trump campaign and Republicans that mainstream media has adopted the Democrats’ political talking point by claiming it is an “attack on democracy,” as Biden asserted in Tulsa, Oklahoma, on Tuesday.

Abbott also noted he signed a bill to “defund cities that defund the police,” as Democrats have called for in the name of social justice.

“For this to happen in Texas? It did happen in Austin, so I signed a bill to defund Austin,” Abbott said during the interview. “Here’s the deal: People shouldn’t be taxed in a city, and pay revenue to a city, that will not provide police for them.”

The legislation will get rid of the city’s ability to increase property taxes, sales taxes or other fees.

“This is going to bankrupt the city of Austin,” Abbott stated. “They need to be looking for a bankruptcy lawyer real quick, because their decision to defund the police will be catastrophic for their city and their bank account.”

Go figure. The one area where the federal government is allowed to get involved, that of national security, which includes the border and immigration issues, is the one place this administration doesn’t want to stick its nose into.