Texas Farm Bureau Bans Nike: “We Are Choosing to Remove Our Companies From This Controversy” 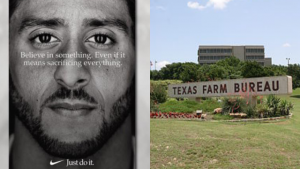 The beautiful thing about capitalism is that it co-exists perfectly with free speech.

When Colin Kaepernick practiced his First Amendment rights while being paid millions by the NFL, fans responded by spending less money on NFL games.

When the NFL decided Kaepernick was not a talented enough football player to continue to make them money, they fired him.

When Nike decided to hire him for their revival of the “Just Do It” campaign, fans responded by ditching their gear, and fans who appreciated Kaepernick’s anti-police, hypocritical disrespect for the flag and preposterous claim that he “sacrificed everything” by kneeling for the anthem before getting picked up for a million-dollar Nike contract were free to purchase his products.

Capitalism wins, and no one’s rights were ever infringed by the federal government.

The thing about controversy like Kaepernick’s anthem protests is that, when a company wants to make money, they’re likely ready to avoid controversy at all costs, and while Nike for whatever reason was thrilled to emphatically endorse one incredibly polarizing side of one of the biggest controversies of the last two years, there are plenty of companies who not only never wanted anything to do with the kneeling controversy but now want nothing to do with Nike.

Western Journal reports on the Texas Farm Burea’s bold declaration that they’re washing their hands clean of Nike and Kaepernick:

On Friday, Farm Bureau spokesman Gene Hall said the Farm Bureau wants no part of the controversy Nike caused by using as its symbol a former NFL quarterback who began the wave of national anthem protests.

“There is a wide range of viewpoints on the Nike controversy,” the email read, according to KWTX. “Texas Farm Bureau and Affiliated Companies employees are asked to not wear Nike-branded apparel while representing the companies.”

“We are choosing to remove our companies from this controversy by discontinuing the use of Nike-branded apparel for business purposes,” the email said.

Interestingly enough, the email also brought this topic right back around full circle to the biggest controversy of Kaepernick’s kneeling protest in the first place: whether or not you have the right to practice your First Amendment in your capacity as an employee for a private company.

You don’t, says the Constitution, which limits the government from infringing your right to free speech.

The Texas Farm Bureau said it was not infringing on anyone’s personal liberties.

“The attire you choose on your own time is a personal matter,” the email said.

The NFL and Nike make their choices about their employee’s right to free speech, and any other company is free to do the same.

And we, the consumer, have the freedom to chose which company should take our money, and can apply our full First Amendment rights to telling off the company whose choice of spokesperson or football player we disagree with.