Texas Deserves Disaster According To This Idiot 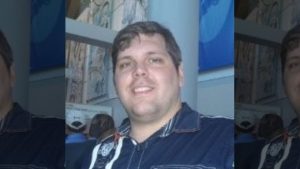 A University of Tampa professor recently suggested that Texans deserve the fallout from Hurricane Harvey because of their support for Donald Trump in the 2016 election.

After tweeting that “hopefully this will help them realize the GOP doesnt care about them,” Ken Storey clarified that he’s “only blaming those who support the GOP,” insisting that they need to “do more to stop the evil their state pushes.”

Campus Reform got a screenshot of the tweet before it was deleted. 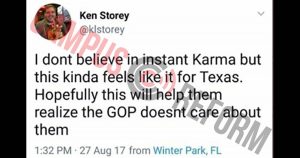 When one of his followers suggested there are good people in Texas he responded by saying,

“Well, the good people there need to do more to stop the evil their state pushes. I’m only blaming those who support the GOP there,” Storey elaborated, to which the same commenter replied by asking if he thinks the same about Trump supporters in Florida.

“Yep, those who voted for him here deserve it as well,” Storey answered, though he later deleted his Twitter account, but a screenshot of his account confirms that he teaches sociology.

From the looks of this douchebag he obviously deserves diabetes.

He later apologized…but it’s hard to erase idiocy.  Fortunately the “good people of Texas” have EACH OTHER!