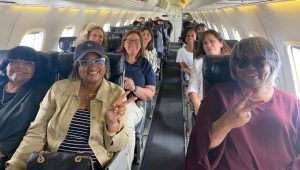 One of the dozens of Texas Democrats who decided to flee the state in order to help block a Republican supported election security bill pass seemed to make a comparison between Gov. Greg Abbott’s threat of having them arrested upon their return to the state to the pursuit of escaped slaves prior to 1863.

Abbott, who is a member of the GOP, has threatened to have these individuals arrested, all 60 of them, for fleeing the state of Texas. State Rep. Senfronia Thompson then fired back by saying, “I’m ready to be arrested,” and then going on to ask, “What do you do to a slave if you don’t do nothing arrest them when they flee?”

The state senator spoke in Alexandria, Virginia, making a declaration that her caucus “refuse[s] to be a hostage.”

Democratic lawmakers from the state lobbed attacks against the Texas governor last week for his demands for liberals to return and support the voting bill, which aims to enhance voter identification requirements and limit 24-hour voting. Since they left, the protesting lawmakers have bragged about their “fugitive” status and boasted about their absence from the Texas state Capitol on social media.

The Democrats have spent their extended protest in the nation’s capital this month speaking with Vice President Kamala Harris and other Democratic lawmakers in Congress to push for the passage of two stalled federal election reform bills.

The Texas Democrats are not going to be returning back to their state until the special session of the Legislature ends. State Rep. Trey Martinez stated that the group of lawmakers is planning to come back home on Aug. 7.

Unfortunately for these Democrats, much of the work they put in to blocking the election security bill has been overshadowed because of six COVID infections that popped up among them, along with pictures that were posted online that featured them flying aboard a plane without a mask.