Texas Attorney General And DFPS Are Now Looking Into Case Of James Younger, 7YO About To Undergo “Gender Transition” 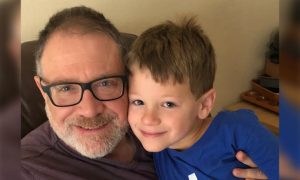 After the news broke this week that a jury determined that Jeffrey Younger should not be allowed to prevent his ex-wife, Anne Georgulas, from beginning gender “transition” procedures with their 7-year-old son, James, the entire rational-thinking world was left stunned.

I don't think people realize just how monumental this case is. We've just crossed a threshold as a society. There's no going back. These are very dark times. Most of all for that poor boy, whose mother is a despicable monster.

There aren’t enough G-rated words to describe the situation this little guy finds himself in, with a mother who wants to turn him into a girl, a father who wants to save him, and a horde of leftists in greater society claiming that it’s “transphobic” to have an opinion on the matter.

How on earth did we ever get here?

Thankfully, however, there appears to be a glimmer of hope in James Younger’s case. If this poor child had the awful misfortune of residing in nearly any other state (I say this as a born-and-raised New Yorker), his story might end with his mother subjecting his underdeveloped, confused little body and mind to chemical castration and hormone treatments that have been shown to carry incredible health risks.

But, this boy is in Texas, God bless him, and that’s not where his story ends just yet.

After droves of concerned groups and individuals cried out for someone in power to step up and help this poor child, Texan Governor Greg Abbott dropped this bombshell:

FYI the matter of 7 year old James Younger is being looked into by the Texas Attorney General’s Office and the Texas Department of Family and Protective Services. #JamesYounger

Praise the Lord, y’all. While Abbott was careful not to express any bias about the situation one way or another in his announcement, Sen. Ted Cruz wasn’t quite so tight-lipped:

A 7-year-old child doesn't have the maturity to make profound decisions like this. The state of Texas should protect this child's right to choose—as an informed, mature person—and not be used as a pawn in a left-wing political agenda. #ProtectJamesYounger

Even pro-LGBT voices in the media expressed shock at the James Younger saga, with Brad Polumbo declaring for the Washington Examiner that gay rights activists must disavow transgender radicalism and stand up for James:

Moreover, numerous studies show “that a substantial majority [of gender-confused kids] — anywhere from 65% to 94% — eventually ceased to identify as transgender.”

Even if the real number is lower, as critics claim, it is still far too high to start performing irreversible physical transitioning for a 7-year-old child. Of course, if James’s gender confusion continues late into his teenage years, he might make such a choice at that point, when a physical transition is both appropriate and medically advisable. But at seven? Come on, people, it’s just irresponsible.

I’d also like to point out that many men, who as adults have come out as gay (and are perfectly happy with our biological sex), liked dolls or preferred to play with girls as children. This does not, as modern transgender orthodoxy would suggest, mean that we were truly women and should have been transitioned. What a strange, backward, and stereotypical view it would be to say otherwise. It just meant that we expressed our boyhood in an unorthodox, but perfectly acceptable, way.

Do gay people really want our rights tied to a movement that would mutilate any child who strays from gender stereotypes? If this is what the “T” in “LGBT” advocates for, I want absolutely nothing to do with it. In fact, such an association clearly undermines the very case for gay equality.

In addition to investigative action from the Attorney General and Family Services, Texas Rep. Matt Krause stated that he will “introduce legislation that prohibits the use of puberty blockers in these situations for children under 18,” which, if passed, will prevent situations like this from ever arising in the state again—and hopefully provoke other states to follow suit:

Absent a special session between now & the the 87th Session, I will introduce legislation that prohibits the use of puberty blockers in these situations for children under 18. We missed our opportunity to do so in the 86th Session. We won’t miss the next one. #savejamesyounger https://t.co/BpbGDPwujZ