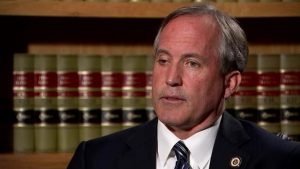 Texas Attorney General Ken Paxton made an appearance on Newsmax on Saturday where he said that despite mixed messages coming from the Biden administration, the law precludes folks from having to attest to their health or their vaccination status.

“I would absolutely think federal law would cover that,” Paxton stated during his interview on “The Count.” “But also, what right does the Congress of the federal government have to tell anybody that they have to be vaccinated. That’s an individual choice.”

“I don’t know under what law they would have to operate under, but they certainly can’t tell the American public that they have to be vaccinated,” he added.

Paxton also questioned the science behind determining if vaccinated people are also spreading the virus, and why people who are vaccinated should care who has not had their shots, “if the vaccine actually works.”

“It should be up to each person to decide whether they want to be vaccinated, vaccinated or not be,” Paxton the stated, going on to add the messages seem to be different from week to week and even sometimes day by day.

“If you talk to the CDC, or you talk to the administration, or you hear from Nancy Pelosi, it’s mixed messaging, and it changes it seems like on a weekly basis,” Paxton proclaimed.

He and show host Carl Higbie discussed President Joe Biden’s changing comments, with Higbie recalling in December when Biden said both vaccines and masks should not be made mandatory.

“I don’t think we know what changed,” the Texas attorney general continued. “It’s odd that his position is a 180-degree return. Who knows why they’re changing what they’re changing, but the reality is I don’t think anybody can answer the question. And guess what? Next week we’ll probably have a different answer to that question, and there’ll be a different message the one year ago.”

“There’s no direction and I’m guessing we’re going to see a different message as we go forward,” he said.

The attorney general then said there’s “no way” his state, the state of Texas, will ever go back to requiring masks, nor will they be requiring people to get vaccinated.

“I don’t think the federal government can order this, and so it’s going to be up to the states to decide what they’re going to do,” Paxton then stated.

This is just one more reason to love the state of Texas, folks. There are still individuals serving in government who actually care about our rights and freedoms, who have made solid decisions regarding this pandemic without sacrificing freedom.