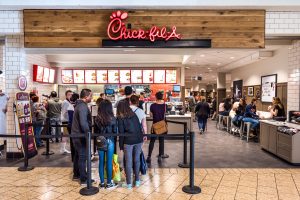 Thou shalt not ban The Lord’s Chicken.

Five Texans have filed a lawsuit against the city of San Antonio for its decision to block Chick-fil-A’s attempts to open a location in the local airport, according to Fox News. Citing the tired old “tastes like hate” rationale, the city banned the chicken joint from opening up in the airport due to founder Dan Cathy’s 17-year-old statement that he affirms marriage between one man and one woman.

“I think we are inviting God’s judgment on our nation when we shake our fist at Him and say, ‘We know better than you as to what constitutes a marriage,'” Cathy said at the time. “I pray God’s mercy on our generation that has such a prideful, arrogant attitude to think that we have the audacity to define what marriage is about.”

Because you are literally not even allowed to hold your own personal convictions regarding the definition of marriage, lest you upset the cult of progressive sexuality.

Except, you know, Chick-fil-A has not only withstood but thrived in spite of leftist boycotting ever since Cathy’s 2012 remarks.

“On Sept. 5, plaintiffs Patrick Von Dohlen, Brian Greco, Kevin Jason Khattar, Michael Knuffke and Daniel Petri filed suit against the city under S.B. 1978, otherwise known as the ‘Save Chick-fil-A Bill,'” Fox News continues. “With this decision, the City Council reaffirmed the work our city has done to become a champion of equality and inclusion,” Roberto C. Treviño, San Antonio’s District 1 city councilman, said at the time. “San Antonio is a city full of compassion, and we don’t have room in our public facilities for a business with a legacy of anti-LGBTQ behavior.”

Texas Gov. Greg Abbott signed the “Save Chick-fil-A Bill” into law this past June, effectively prohibiting government institutions from harming businesses merely for their religious beliefs or donations to religious organizations. As a New Yorker, I can tell you I’m having some serious governor envy right now.

More on the suit from Fox:

In the lawsuit, the plaintiffs pushed for the court to declare that the city of San Antonio “violated and continues to violate” the law by banning Chick-fil-A from the San Antonio airport and issue an injunction to block the city and airport shop operator Paradies Lagardère from banning the chain at the air hub in the future. Furthermore, the plaintiffs also hope to issue another injunction to have a Chick-fil-A open at the airport and issue an order to stop the city from “taking any adverse action against Chick-fil-A or any other person or entity, which is based wholly or partly on that person or entity’s support for religious organizations that oppose homosexual behavior” and receive attorney’s fees and other relief.

In a statement on Monday, Jonathan Saenz, president of Texas Values Action, said the bullying against Chick-fil-A by San Antonio has given folks no choice but to take the city to court.

“The continued religious ban on Chick-fil-A by the San Antonio City Council has left citizens with no choice but to take this case to court,” said Saenz, according to The Texas Tribune. “Any other vendor that tries to replace Chick-fil-A at the airport will be doing so under a major cloud of long and costly litigation with the city.”

Laura Mayes, chief communications officer for the city of San Antonio, told The Texas Tribune, however, that the lawsuit was built upon a “political agenda,” unlike the efforts to boycott and ban Chick-fil-A in the first place which totally have nothing whatsoever to do with any kind of agenda. Nope. Not at all. Perish the thought.

“Among the many weaknesses in their case, they are trying to rely on a law that did not exist when Council voted on the airport concessions contract,” Mayes said. “We will seek a quick resolution from the Court.”

Fair enough, but now that the law does exist, let’s see how well the ban holds up. That’s what courts are for, people.