Terrence Floyd, Brother Of George Floyd, Tells Protesters ‘Not To Tear Up Your Town’ 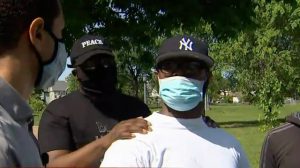 With the nation being ripped apart by rioting, looting, and violent protests in the wake of the death of George Floyd, the victim’s brother, Terrence, is urging folks who are angry over the incident “not to tear up your town,” a message that people really need to hear right now.

Floyd said, “Sometimes I get angry, I want to bust some heads, too. I wanna … just go crazy. But I’m here. My brother wasn’t about that. My brother was about peace. You’ll hear a lot of people say he was a gentle giant.”

Terrence’s older brother, George, died while a police officer pinned him down to the ground by placing his knee on his neck. The officer responsible, Derek Chauvin, has been fired and charged with third-degree murder and second-degree manslaughter. The other three officers on the scene have also been fired, however, none have been charged.

“Don’t tear up your town, all of this is not necessary because if his own family and blood is not doing it, then why are you?” Terrence Floyd told ABC News.

“If his own family and blood are trying to deal with it and be positive about it, and go another route to seek justice, then why are you out here tearing up your community?” he continued.

“Because when you’re finished and turn around and want to go buy something, you done tore it up. So now you messed up your own living arrangements. So just relax. Justice will be served,” he added.

Terrence went on to note that his brother had a reputation for being a positive person and for being motivated, noting that’s how he wanted him to be remembered, not for being connected with all of the rioting.

He also went on to say that he felt some of the protesters were just using this situation as a justification to be stupid.