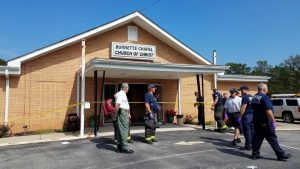 At approximately 11:15 a.m. local time on Sunday, a masked gunman entered the Burnette Chapel Church of Christ in Antioch, Tennessee, and opened fire.

One person has been killed, and at least seven others wounded.

The Tennessean reports that the attack only came to an end when “a male member of the church exited the sanctuary, got a gun from his vehicle and confronted the shooter, who then shot himself, according to Don Aaron, spokesman for police.”

The man who challenged the attacker had allegedly been pistol whipped prior to retrieving his firearm.

According to the Nashville Fire Department, which has been keeping the public informed via Twitter, “all of the wounded,” the majority of whom are “over 60,” were “transported to area hospitals.”

The shooter, who has been identified as “a Rutherford County man in his mid 20s,” is alive, and being treated at a local hospital, while church-goers who weren’t injured are being interviewed by police.