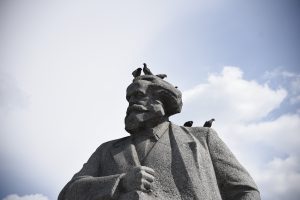 Most young Americans don’t learn a whole heck of a lot about socialism or communism until they hit college (which, incidentally, may be why some folks are so keen to buy votes with student debt cancellation).

Now, thanks to Teen Vogue, the next generation can get a jumpstart on their indoctrination before they even don a cap and gown.

The magazine, which is now online-only after folks kept burning stacks of them in protest to their fondness of advising teens on various sex acts, ran a piece last year on everything today’s teen needs to know about Karl Marx.

Because why read a history book, watch a documentary, or even visit the Free, Online Encyclopedia Which Must Not Be Named to learn about a controversial historical figure when you can read a stuffy editorial from a bunch of ivory tower elitists?

Now that Marx’s ideas are the cornerstone of virtually every Democratic presidential candidate’s platform and this year’s graduating class is getting ready to vote in their very first elections, Teen Vogue must have figured now is as good a time as any to re-run their Marx piece.

The legacy of Karl Marx’s ideas and how they’re relevant to the current political climate: https://t.co/G9L2xUhkk1

“The anti-capitalist scholar’s ideas are often memed,” the editorial reads, pandering to the dullest of today’s youth who apparently don’t absorb any information that isn’t relevant to social media.

You may have come across communist memes on social media. The man, the meme, the legend behind this trend is Karl Marx, who developed the theory of communism, which advocates for workers’ control over their labor (instead of their bosses). The political philosopher turned 200-years-old on May 5, but his ideas can still teach us about the past and present.

While you may not necessarily identify as a Marxist, socialist, or communist, you can still use Karl Marx’s ideas to use history and class struggles to better understand how the current sociopolitical climate in America came to be. Instead of looking at President Donald Trump’s victory in November 2016 as a snapshot, we can turn to the bigger picture of what previous events lead us up to the current moment.

Of course, the People Of Twitter™ were all too eager to give Teen Vogue the roast they were practically begging for.

Well, I suppose that fits just nicely with the left’s utter disdain for children and raising families.

The eventual starvation that has historically come from either the frivolous-mismanagement or gulag-building-totalitarian flavors of socialism and communism probably does wonders for one’s figure.

Short, sweet, and to the point.

His legacy is millions and millions of dead civilians while millions more suffered under ruthless tyranny.

But other than that…

Now, now. Don’t try to bring historical facts into this.

Well, cheerleading the ideology that murdered 100 million innocents and enslaved and oppressed hundreds of millions more…is one way to play this. My wife grew up in Communist Romania, & our daughters know Communism better. They'll be mocking Teen Vogue rather than reading it.

At least one person was keenly aware of the radical shift the content of these magazines seems to have made. Bring back the personality quizzes!

Death, destruction and poverty are his lasting legacies. He’s relevant only as a cautionary tale of stupidity.