Ted Cruz Was Right, Vegan BBQ Is a Thing, and It’s Breaking the Internet 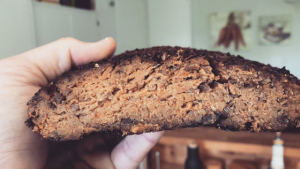 In an incredibly clever and fitting knee-slapper, Texas Senate incumbent Ted Cruz joked over the weekend that his progressive Democrat Beto O’Rourke would mandate Texas BBQ include tofu if he were elected.

While many might consider it impossible to include “tofu” and “BBQ” in the same sentence, one vegan chef has gone there, tweeting out his latest creation this week and subsequently breaking the internet with the mind-blowing question as to whether or not tofu can even be considered BBQ.

Vegan brisket experiment was a success! 18 hour smoke over oak. Is it beef? Nope. But the taste/texture are pretty great. Mix of jackfruit, seitan, miso, beer, Franklin BBQ sauce made w extra sugar so it carmalized to a crust — and it did! Plus I don’t feel gross after eating it! pic.twitter.com/BivCMm4D3c

The Daily Wire reports that TV writer and aspiring vegan chef Kevin Biegel was pleased to show off his concoction to the world–but the world wasn’t thrilled.

Biegel isn’t a vegan but he’s taken to finding healthier food options since being diagnosed with heart trouble. The vegan brisket is the latest in a series of food experiments Biegal has reportedly conducted. He also frequently tools around with real barbecue; he said in a later tweet that he’s working on perfecting a non-vegan brisket too.

His vegan brisket is a combination of jackfruit and seitan (a meat substitute made from wheat gluten), bathed in miso, beer, and sauce from the Austin, Texas barbecue staple, Franklin’s BBQ.

It might be healthy, but it certainly won’t pass for Texas BBQ. Critics did not tell back in telling him so:

This is what good brisket looks like. I know because I made it. pic.twitter.com/cPhUlmjYy2

Just hear me out…… what…, what if…….. you at this instead pic.twitter.com/kYzuIu9ugb

I agree with Twitter’s proposed alternatives.