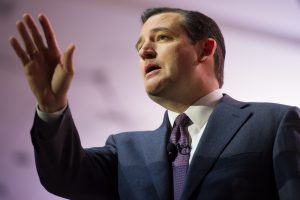 Sen. Ted Cruz is a much a breath of fresh air on social media as he is on Capitol Hill. And, if anyone could make us see reason in supporting an idea like a “Space Force,” it’s that guy.

Seriously, who do they need to fire that came up with the name “Space Force”? The name begs mockery. But, I digress.

When the Trump administration proposed a very small division of the Air Force devoted to ensuring America’s preparedness to “compete, deter and, if needed, win in a complex domain,” the idea was widely well-received.

Cruz, who shares the heavy burden of being one of the precious few voices of reason within Congress, said during an aviation and subcommittee hearing on Wednesday that “pirates threaten the open seas and the same is possible in space. In this same way, I believe we too must now recognize the necessity of a Space Force to defend the nation and to protect space commerce and civil space exploration.”

You know, I think this is a great idea suffering from poor branding. If folks hadn’t started calling it “Space Force,” I’d probably be writing about something else right now. But, Space Force it is, and the super science-y leftists have commenced their field day.

Cruz, however, is proving himself more than capable of withstanding and even tastefully outdoing the mockery.

Sure, a frigate w/ skull & crossbones in space is unlikely anytime soon, but what MSNBC conveniently omits is the threat of piracy, espionage & violence from rogue & rival NATIONS is very real. Indeed, China has already developed & tested weapons to destroy satellites in space. https://t.co/fVUZUeWVLj

Killing two birds with one stone, the Texan called out Twitter’s CEO with clear evidence of the anti-conservative bias on the platform, noting that liberal jokes—and not the Senator’s responses—were trending:

Hey @jack how come Twitter’s “moment” quotes all the snarky leftists making fun of my comments, but doesn’t include my tweets in response explaining the real point that NATIONS like China have already developed & tested weapons to destroy satellites? https://t.co/dwkM5ndXj3

At this point, the leftists would probably have mocked Cruz for sneezing, and of course, they’d do it with terse insults that don’t actually convey any ideas.

No matter, Ted can handle that: