Ted Cruz Makes ‘Zodiac Killer’ Joke on Halloween. The Left is Not Amused. 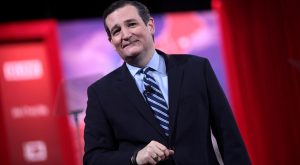 Sen. Ted Cruz has proven time and time again that he’s not only a diehard constitutional conservative, but that he’s also got a wickedly funny sense of humor.

He recently put that sense of humor on full display on Halloween, poking fun at the ridiculous memes put out during the 2016 election which attempted to peg him as the Zodiac Killer.

It seems the left in America doesn’t have all that great of a sense of humor.

Now there’s (almost) no chance that Cruz is actually the Zodiac Killer. After all, the Zodiac Killer sent his last letter in 1969, a full year before Ted Cruz was even born. But the connection became a running gag, regardless, and on Tuesday, Cruz tweeted out one of the Zodiac Killer’s cryptic notes as part of a Halloween gag.

This year, though, leftists didn’t think Cruz’s gag was quite so funny, and they devoted hundreds of Tweets and dozens of column inches to suggesting that Cruz was either exposing his complete irrelevance to modern culture or that he was deliberately disrespecting the actual Zodiac Killer’s many victims, which included a young girl.

The Cut was downright angry that Cruz used the Zodiac Killer meme as his chosen Halloween gag, and eviscerated the sitting Texas Senator for trying “desperately” to relate to his constituents, as though Cruz’s challenger, Democrat Beto O’Rourke’s skateboard antics and his supporters’ embarrassing tribute videos have been shining examples of how to get in touch with the locals.

Instead, the Cut suggested, Ted Cruz should have dressed like a can of soup because he once bought a lot of cans of soup (by the way, they just adored Beto’s skateboarding skills, or lack thereof).

Here’s some of the tweets from lefties online. Brace yourselves.

NOT FUNNY. people were killed by this serial murderer. why would you joke about this???

I had to go to school laying on the floor of the bus for a month because of the zodiac killer when I lived in the bay area. What the hell is the matter with you?

You know, this whole Zodiac Killer meme was created by liberals, and now that Cruz has taken it from them and played along with the joke, they’re all furious. Isn’t that hilarious?

On a side note, these individuals who are just so infuriated by all of the murders carried out by the Zodiac Killer probably don’t give one rat’s behind about the millions of babies that have been murdered by abortion since Roe v. Wade. Sorry, but that’s a glaring inconsistency, and until that is fixed, there’s not any significant reason the left should ever be listened to on issues concerning the preservation of life.