Ted Cruz Makes Hilarious Joke At His Own Expense, Libs Feel “Wrong” Laughing At It 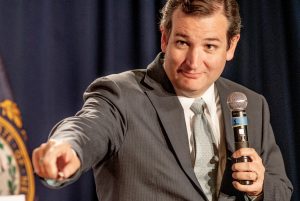 Martin Niemoller, author of the iconic First They Came… poem, once said that, “If you can laugh at yourself, you are going to be fine. If you allow others to laugh with you, you will be great.”

Ted Cruz is no stranger to the fact that, well, folks on the left really don’t like him. And, folks on the left who use Twitter? Abandon all hope, as well as any expectations of common decency and adherence to the standards of the English language.

But, as previously reported, Sen. Cruz is among the more social media savvy statesmen (or, at least he has a solid intern doing the job) and can handle just about anything the screeching hordes of Twitter users can lob at him. Creepy satire, doctored videos, assorted weak jokes, and innumerable Zodiac Killer theories abound, but Ted can hack it.

Heck, sometimes we even get some great bipartisan policy efforts out of the guy’s skillful typing thumbs.

Occasionally, Texas Ted will show up in my Twitter feed in a way that makes me want to stop and thank the Lord that I was born for such a time as this.

This is one of those moments.

When some droopy goth on Twitter posted this tweet, which I, as a casual Cruz supporter, admit is pretty funny in itself, it seemed like that was the end of the story. Funny joke about Ted Cruz, laugh, scroll onto the next video of cute puppies.

if ted cruz runs for office again can we bring this back pic.twitter.com/PeGKpnE9x3

Until the man himself crashed the party.

Excuse my hyperbole, but that single sentence is the greatest thing the internet has ever produced. Bar none. 10/10.

What’s just as funny is how squeamish Ted made a gaggle of assorted leftists when his epic comeback actually made them laugh:

God help me, I laughed

I’m very mad this is funny

I’ve laughed at like two of his tweets lately. What planet is this?!

You win this round, Cruz.

And my personal favorite:

After absorbing the vitality of the child he consumed

Maybe the People Of Twitter™ have learned from this little stunt that it won’t kill you to be civil with your political and ideological opponents. They’re human, too. 100% human.