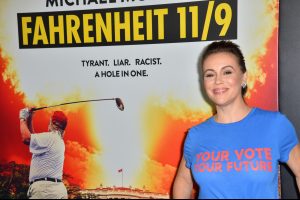 Y’all. It’s only September, but Christmas just came early for folks like me who love debates. If Twitter strutting results in real-world action, our dear Ted Cruz and the incorrigible Alyssa Milano will sit down for a dialogue on gun control as soon as next week!

I’d be happy to sit down & visit next week about uniting to stop gun violence & about the Constitution. If we can have a civil & positive conversation—in the spirit of 1 Peter 4:8 as you suggest—despite our political differences, that might help resolve the discord in our Nation. https://t.co/YfkB97wAA0

Whoa, whoa, whoa, let’s back up a minute. In case you missed it, the context of this interaction is set in another of Cruz and Milano’s feisty Twitter interactions, which began with Milano’s ridiculous reaction to an epic Twitter thread from Rep. Matt Schaefer on gun control:

Can someone cite which passage of the Bible God states it is a god-given right to own a gun? This guy is unbelievable and is clearly owned by the gun lobby. #NoRA https://t.co/PxVV1RoV2Z

I mean, our Constitution does outline the right to one’s own property as an inalienable right given by our Creator. Guns are property. Knives are property. A nailed-up baseball bat is property. The Bible doesn’t tell us we can own cars or Goldendoodles either, but that’s an anachronistic argument made in bad faith—Milano clearly doesn’t want a legitimate answer to her ridiculous hypothetical.

Still, a legitimate answer is exactly what Cruz offered.

“An excellent Q, worth considering carefully w/o the snark of Twitter. It is of course not the right to a modern-day firearm that is God-give but rather the right to Life & the right to Liberty. Essential to that right to life is the right to DEFEND your life & your family,” Cruz began.

2/x The right to self-defense is recognized repeatedly in the Bible, eg Exodus 22:2: “If a thief is caught breaking in at night & is struck a fatal blow, the defender is not guilty of bloodshed.” (Note, though, verse 3 says it IS murder if during daylight (ie, not self-defense).

4/x And, for that reason, the Second Amendment provides “the right of the people to keep and bear Arms, SHALL NOT be infringed.” It wasn’t to protect people’s ability to hunt, or to shoot target practice, but to defend their lives, their homes & their families.

6/x St. George Tucker, one of the most important scholars in early America, explained the reasons behind the Second Amendment as follows: “This may be considered as the true palladium of liberty. . . . The right of self defence is the first law of nature….”

8/x That’s also why, post Civil War, disarming Black Americans was a critical objective of the KKK, and was memorialized in countless Jim Crow laws—to strip African-Americans of their God-given right to self-defense from violence.

And with that, Cruz ended his thread, cautioning Milano against using horrific crimes “as an excuse to violate the [constitutional] rights of law-abiding citizens”:

10/x Playing politics w/ these deranged crimes—and trying to use them as an excuse to violate the constl rights of law-abiding citizens—won’t make anybody safer. Forcible gun confiscation (as some 2020 Dems urge) won’t prevent mass-murders. But it would weaken our self-defense.

Let’s all pause for a moment to give that thread the standing ovation it deserves. Done? Did you actually stand? Okay, good.

While Milano did not immediately respond to any of the points Cruz made in his thread, she did ever-so-kindly request a live-streamed meeting so she can expose his “bullsh*t” to the American people, while simultaneously citing 1 Peter 4:8 (“And above all things have fervent love for one another, for ‘love will cover a multitude of sins’”).

Now, with that turd sandwich response, the issue could have been over and this would have been simply another article about Ted Cruz owning a lib on social media. Those are always fun to write.

And then this happened:

Great. I just called your office. They gave me your schedulers email address. I emailed to set up a meeting. Looking forward to it. https://t.co/Sz8avRVGrq

Now, as a huge fan of actual, scholarly debates between two or more people who don’t identify as unicorns and who are capable of not committing crimes against logic every fifth word, I’m tempted to be pessimistic about this. If all you’ve ever seen are presidential “debates,” you can’t possibly understand the magnificent symphony that is a well-done debate conducted calmly and intelligently.

If Milano is capable of even coming close to that caliber of critical thought and coherent expression, this is sure to be a treat.