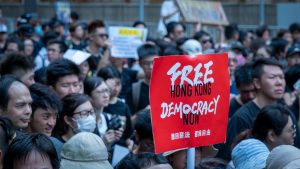 Over the weekend, the Twitterverse was set alight when the general manager of the Houston Rockets dared to share a simple, succinct tweet expressing his support of the Hong Kong protests for increased independence from China.

Because having an opinion isn’t allowed when the Chinese market makes up a vast chunk of your livelihood, apparently.

The National Basketball Association (NBA) and the Houston Rockets cowered to communist China on Sunday after Rocket’s General Manager Daryl Morey tweeted out support for Hong Kong which sparked an immediate backlash from Chinese businesses and the Chinese government.

Morey tweeted out a graphic on Friday evening that stated: “Fight For Freedom Stand With Hong Kong”

A bunch of us have shared this, but #ICYMI, here's what @HoustonRockets GM Daryl Morey tweeted that offended his bosses and league officials pic.twitter.com/agjiLZjC2R

“The Houston Rockets suddenly find themselves in the middle of a geopolitical controversy that could put their chief front-office executive’s job in jeopardy,” The Ringer reported. “After general manager Daryl Morey expressed support in a since-deleted tweet for pro-democracy efforts in Hong Kong, the Chinese government, the Chinese Basketball Association, and various Chinese businesses quickly denounced Morey and moved to sever ties with the Rockets. As a consequence, league sources told The Ringer that Rockets ownership has debated Morey’s employment status and whether to replace him.”

Tilman Fertitta, the team owner, had this to say about Morey’s swiftly-deleted tweet:

Listen….@dmorey does NOT speak for the @HoustonRockets. Our presence in Tokyo is all about the promotion of the @NBA internationally and we are NOT a political organization. @espn https://t.co/yNyQFtwTTi

We recognize that the views expressed by Houston Rockets General Manager Daryl Morey have deeply offended many of our friends and fans in China, which is regrettable. While Daryl has made it clear that his tweet does not represent the Rockets or the NBA, the values of the league support individuals’ educating themselves and sharing their views on matters important to them. We have great respect for the history and culture of China and hope that sports and the NBA can be used as a unifying force to bridge cultural divides and bring people together.

For his part, Morey swiftly deleted his tweet and offered the following statement:

2/ I have always appreciated the significant support our Chinese fans and sponsors have provided and I would hope that those who are upset will know that offending or misunderstanding them was not my intention. My tweets are my own and in no way represent the Rockets or the NBA.

However, the NBA faced a massive backlash, and rightfully so, from all manner of blue checks, including a few U.S. senators.

Political scientist Ian Bremmer had no shortage of thoughts on the debacle, my favorite of which being this simple declaration:

I get the @NBA not wanting to side with Hong Kong because it’s politically uncomfortable.

But apologizing to the Chinese dictatorship against the democracy they’re repressing? As an American sports league?

And this dude from The Washington Examiner:

This, from a reporter for NJ Advance Media:

This whole situation is gross. The NBA made a big deal about supporting players' freedom of speech. Apparently that ends when money gets involved.

And it's not like @dmorey said something all that provocative. Supporting democracy seems pretty safe. https://t.co/Pa0O4eavVH

It’s clear that the @NBA is more interested in money than human rights. Tonight’s statement from Commissioner Silver is an absolute joke.

The NBA is kowtowing to Beijing to protect their bottom line and disavowing those with the temerity to #standwithHongKong. Shameful! https://t.co/RBPJa04xzK

Sen. Josh Hawley (R-MO) pointed out perhaps the biggest issue of the NBA’s statement, namely that we would even want to “bridge cultural divides” with a nation that mass-murders and persecutes its own people:

And, last but not least, Sen. Ted Cruz (R-TX) expressed his deep disappointment in the NBA’s treatment of the situation:

As a lifelong @HoustonRockets fan, I was proud to see @dmorey call out the Chinese Communist Party’s repressive treatment of protestors in Hong Kong.

Now, in pursuit of big $$, the @nba is shamefully retreating. https://t.co/7waMde5KrM

It’s bad enough that China subjects its own citizens to utterly Orwellian persecution and thought-policing. It’s despicable that they are continuing to use their buying power to subject the citizens of sovereign nations to that same oppression, and it’s shameful that anyone in the “land of the free” would bow to them.