Tech Community Turning Their Backs On The New York Times 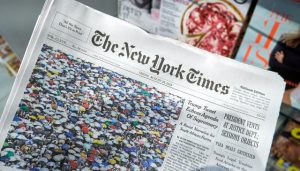 A brand new app will give people the ability to block New York Times reporters on Twitter, all at the same time, which just goes to show how much the ongoing feud between the NYT and the tech community has escalated.

The app, BlockNYT, was rolled out on Monday morning, anonymously on Twitter, promising folks the ability to “block 800 NYT reporters for the low price of $0.” The tech has been circulating very quickly among tech workers on the West Coast, who in recent times have grown to distrust reporters who cover tech companies and the online culture surrounding them.

Reporters at the Times have developed an increasingly adversarial relationship with major tech figures. Angel investor Balaji Srinivasan has clashed repeatedly online with Taylor Lorenz, a tech reporter at the Times. Lorenz drew fire for claiming on February 6 that investor and entrepreneur Marc Andreessen, cofounder of venture capital firm a16z, had used the word “retard” in the voice-chat app Clubhouse. Multiple participants in the chat room denied the allegation.

The glossy “BlockNYT” website mimics the Times‘s front page. But rather than real news headlines, the page features 21 Times scandals, ranging from Walter Duranty’s whitewashing the Soviet famine in 1933 to the recent news that a podcast on ISIS got key facts wrong.

Reached for comment, the anonymous figure behind the app said, “The New York Times won a Pulitzer Prize for helping starve five million people to death. That was almost ninety years ago. Their star reporters lied on Twitter. That was yesterday.”

In June 2020, a Times journalist reportedly planned to doxx—or publicly identify—the anonymous figure behind “SlateStarCodex,” a popular blog in the tech community. The blogger, who claimed anonymity was vital for his safety and livelihood, deleted all posts on the blog, leading to widespread condemnation of the Times.

See? It’s not just conservatives who hate the NY Times. This publication used to represent high quality journalism and integrity in reporting. However, all of that has been tossed out the window in exchange for being a propaganda machine for the Democratic Party.

Well, for them, anyway. It’s pretty dang positive for those of us who are tired of NYT reporters showing up in our feeds.