Tearing Down Racism One White Thing at a Time 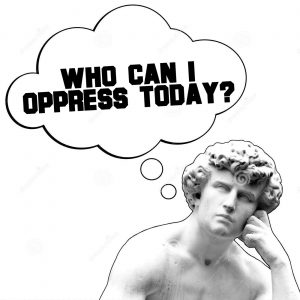 Today it would seem that everything has become racist. It doesn’t matter what you say, what you believe, where you live, or who you love…if you’re white…you’re racist!

In liberal logic, if you happen to be white the only way to get around being thought racist is by accusing other whites of their racism. You’ve also gotta link every white thing in the world to racism too. Things like statues made out of white marble.

So, in my house we’ve passed a few new rules. From now on there will be no milk, flour, eggs, mayonnaise, or bread. You can eat a banana but not if you peel away the yellow skin to reveal its evil white privileged interior. Same goes for apples and coconuts. We aren’t going to fold fitted sheets like Martha White and we won’t watch The Golden Girls with Betty White. In fact, I need both of those racists to change their names.

I’m disappointed that I grew up in a house where my dad wore tighty whiteys. Well mostly white anyway. What’s that even mean? Tighty? Won’t let nothing in or out! Why does whitey gotta be so tighty? That’s racist! And Toilet paper be gone! We are done with your quilted layers of whiteness. We CAN however take a dump in the porcelain white toilet. Give it what it deserves. And you know what? I’m really sick of the man in the moon looking piously down on me with his shiney smug white racist face.

Seriously! I’m done! No more baby powder, sugar, salt, styrofoam, ice cream, whipped cream, Clorox bleach, ice, tooth paste, cottage cheese or elmers glue. If it’s cold outside you better hold your breath. Get the paper out of the printer, throw out the dental floss, and get rid of any ghosts. I’m sick to death of the whiteness folks. Who said cocaine?

Why are there white lines on the side of the road? What are they trying to keep in? It’s confining and oppressive. Have you seen Anderson Cooper’s hair? Who knew hair could be so racist?

There will be no Florida Georgia line music anywhere near me ever! Not because they’re racist but because they suck. But they ARE white. And I’m quite certain that plenty of racist things have been seen, done, heard or thought along the border of Florida and Georgia. So get it out of my life please.

That’s right folks…the only way to vanquish racism from our world is to eradicate all things white. Right?!?

Forget that the real problems out there may be issues of the heart…you know that thing inside you that pumps the SAME red blood that runs through all of our veins? Maybe we need to change our mindsets. Adjust our brains, which by the way, look the same in every head regardless of skin pigmentation. OR we can just keep pointing fingers at all the externals…like white marble statues, civil war monuments, political differences, flags, banners, accents, and skin tones and falsely say they are to blame and as a result take one more lap to nowhere. Racism is a matter of the heart. Not art.