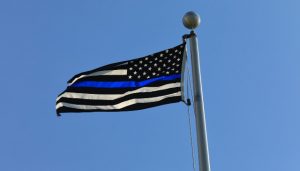 A teacher from the state of Washington has been forced to take down a “Thin Blue Line” flag, which is pro-police, down from her classroom amid claims that it is a “political symbol.”

However, the school is perfectly fine with posting up messages supportive of Black Lives Matter and the LGBT Pride flags being put up in the building. That probably surprises nobody, given the current condition of this country and how the left has transformed our schools into indoctrination centers.

“They told her that it’s controversial to have that flag up. That it makes kids and staff feel unsafe, which to me, that does not make sense at all,” the teacher’s brother, Chris Sutherland, went on to tell the host of the “The Jason Rantz Show” on 770 KTTH conservative talk-radio.

Sutherland is a former police officer with the Marysville Police Department in Washington, and his sister had hung the “Thin Blue Line” flag to support him in her classroom at Marysville Middle School. The flag was also surrounded by photos of her brother.

The teacher first placed a “Thin Blue Line” sticker on her laptop to honor her brother and other law enforcement officers. At the time, an assistant principal objected to the sticker.

According to an HR document on the incident, she alerted the teacher to “concerns about how students, families, and community members might interpret what the image is intending to communicate, and that this interpretation may cause a disruption to the learning environment.” Objections were dropped, and the teacher later raised the flag in her classroom.

The “Thin Blue Line” flag, which resembles an American flag but has a blue stripe, is a sign of support for law enforcement but has also come to signal opposition to the racial justice movement and is seen as a symbol of white supremacy or support for the Blue Lives Matter cause, NBC News reported.

You all probably remember the riots and looting that spread all across the country last year, courtesy of the Black Lives Matter movement and their rage over George Floyd being killed while in police custody. According to Sutherland, the school is very supportive of BLM messages, which are allowed in classrooms.

“The teacher also displayed a Pride flag in her classroom to support a gay relative, Rantz reported. Rantz said the district refused to explain why BLM and pride flags were allowed, but not pro-police flags,” the report said.

“The teacher was ordered to remove the flag or “face disciplinary action.” She removed the ‘Thin Blue Line’ flag from her classroom, but said in a message to HR that the ordeal has been the most traumatic and hostile’ situation she’s experienced at the school,” Newsmax reported.

Sutherland stated his sister plans to keep fighting to get the flag put back up in her classroom.