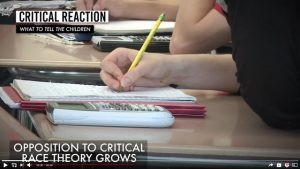 A new report that came out from a task force has revealed that critical race theory is far more widespread across schools in North Carolina than leaders had previously believed.

The Fairness and Accountability in the Classroom for Teachers and Students task force, which was put together by Lt. Gov. Mark Robinson back in March, has found 506 examples of political bias and teachings that are associated with critical race theory in the state’s schools. The examples were submitted by a number of students, teachers, and parents who stated they witnessed the bias in their schools via an online portal that opened back in March and is currently still in operation.

The report contained several alleged incidents of bias in North Carolina’s schools. One school employee said his or her school’s “teacher of the year” had Black Lives Matter decorations on her door and once wore a shirt that read, “Blue lives murder,” while the complainant was reportedly not allowed to wear political apparel supporting Republicans.

Another teacher, who has been an educator for 15 years, said she no longer trusts the values being taught in school.

“As a parent and a grandmother, I don’t want my family attending public school now, and that is really saying something because my mother was a teacher, and my sister is a teacher in public school,” the teacher went on to say in the report. “I don’t trust the values being taught all because of the political views. … I pray you can do something to fix what is going on so I can continue to believe in what I do.”

One parent stated that their child “quickly learned to just write papers from the teacher’s point of view to get an A.”

“While they should have been learning math, science, history, etc., they were learning how to play the game to get a good grade,” the parent stated.

“On Wednesday, state Senate leader Phil Berger, a Republican, joined Robinson to present the findings of the 766-page report, reading aloud several examples regarding critical race theory that were found in the school systems,” the WE report stated.

“Don’t tell me this doctrine doesn’t exist. Don’t tell me that all these teachers and parents are just making this stuff up,” Berger said while making comments during Wednesday’s press conference in Raleigh, North Carolina.

“The findings were later presented to the state Senate’s Education/Higher Education Standing Committee. On Thursday, the chamber passed the House’s ‘Ensuring Dignity and Nondiscrimination in Schools ‘ Act, which prohibits the teachings of certain concepts, including critical race theory, which (along with other closely related ideologies) holds that America is inherently racist and that skin color is used to create and maintain social, economic, and political inequalities between white and nonwhite people,” the report added.

Folks, it’s more critical now than ever to really be attentive to the kind of assignments, reading, and other homework being brought home by your children. Ask them what they learned that day along with reading selections from textbooks.

Most of all, consider pulling your kids out of schools that are government run and funded, because sooner or later, all schools are going to be teaching this garbage and dividing our country.