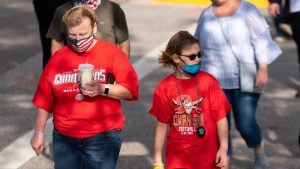 Tampa, Florida Mayor Jane Castor promised on Monday to use video footage of folks who hit the streets after the Super Bowl to celebrate the Buccaneers victory over the Kansas City Chiefs without wearing a mask.

Castor held a press conference on Monday afternoon, claiming that local law enforcement would be using video footage of the celebration to “identify” fans who did not abide by the city’s mask mandate and “handle” their rule breaking.

Still think any of this mask business is about the virus? If so, you aren’t paying attention.

“We had tens of thousands of people all over the city, downtown, out by the stadium and very very few incidents,” Castor began. “So I’m proud of our community but those few bad actors will be identified and the Tampa Police Department will handle it.”

She went on to note that the “majority of the individuals that I saw out and about enjoying the festivities associated with the Super Bowl were complying” with the city’s outdoor mask mandate.

Those that were not, though, could expect a fine if they appear on video — action taken, the mayor suggested, for their own good.

“There just has to be that level of personal responsibility. You can supply everyone with a mask, advise them of the science behind it and expect that they are going to abide by the mask order,” Castor went on to state.

Castor signed an executive order just ahead of the Super Bowl that required a mask to be worn both inside and outside where social distancing wasn’t possible. However, at this time, it’s not clear if Tampa law enforcement can actually enforce the order.

Some of the fines could be up to $500 for those who ignored the order and decided to actually breathe fresh oxygen while enjoying themselves.

To help with compliance, the city actually handed out more than 200,000 masks.

One of the problems Tampa is going to have in enforcing this executive order is that state Gov. Ron DeSantis signed his own executive order last year that would make it very difficult for local governments to enforce mask policies and actually prohibits them from fining people for not abiding by the mask rules.