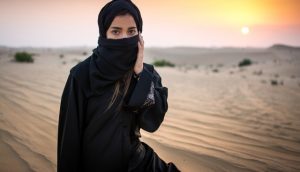 Portrait of a young Arab woman wearing traditional black clothing during beautiful sunset over the desert.

On Tuesday, the Taliban declared a general “amnesty” for all people in Afghanistan and are now apparently urging women to join the government after they took over the country, an official who works with the group said.

Gee, how progressive of them.

The announcement about the amnesty was made by Enamulla Samangani, who is a member of the Islamic Emirate’s cultural commission on Afghan state TV, which the Taliban also now controls. In other words, they have a platform to spread propaganda. Oh joy.

“The Islamic Emirate of Afghanistan doesn’t want the women to be the victims anymore,” Samangani went on to say. “The Islamic Emirate of Afghanistan is ready to provide women with environment to work and study, and the presence of women in different (government) structures according to Islamic law and in accordance with our cultural values,” adding that “all sides should join” the government, according to a report that was published by the  Associated Press .

Amid the Taliban takeover, women in Afghanistan have raised concerns about their future and safety under the Taliban government, which stripped them of many basic rights when it last governed the country.

While there are presently no major reports of abuses of conflict in the capital of Kabul as the Taliban now control the surrounding area, many residents have remained at home in fear after the Taliban insurgency resulted in prison breaks and looted armories. Taliban officials reportedly began taking weapons from civilians on Monday.

The same day, the international airport in Kabul became a chaotic scene full of panic and desperation, as many Afghan citizens attempted to board planes and exit the country. Several even clung to the sides of aircraft and only to fall to the ground during takeoff.

“I am deeply saddened by the facts that we now face. But I do not regret my decision to end America’s war-fighting in Afghanistan,” Biden said on Monday, going on to add later, “American forces cannot and should not be fighting in a war and dying in a war that Afghan forces are not willing to fight for themselves.”

Biden has made so many mistakes this year that it’s a wonder the guy hasn’t gotten himself impeached yet. Oh. Yeah. Those kind of rules are only for conservative, freedom-loving individuals. How could I forget?