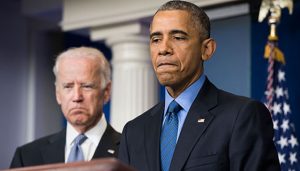 So it seems that at least part of the blame for the fall of Afghanistan to the Taliban lies with former President Barack Obama, since he is the man who released Khairullah Khairkhwa, who was released back in 2014 in a deal to free deserter U.S. Army soldier Bowe Bergdahl.

If you remember correctly, conservatives were vehemently opposed to this particular move, noting that those exchanged for Bergdahl would likely return to the battlefield and cause problems later on down the road. Which is exactly what has happened.

Obama had promised that these individuals, who were deemed too dangerous to be released, would be taken to Qatar and kept from causing any kind of trouble in Afghanistan. Perhaps Obama’s idea of “trouble” is different from the rest of the country, because taking over a nation and attempting to enforce Sharia law certainly seems a bit troublesome to say the least.

Khairkhwa as believed to have been a close associate of Osama bin Laden.

However, the freed detainees quickly used Qatar as a base to form a regime in exile.

In fact, members of the Taliban Five were recognized by Western diplomats as official representatives of the movement during recent “peace” talks, the Post said. Khairkhwa actually sat across the table from President Joe Biden’s envoy to Afghanistan, Zalmay Khalilzad, in Moscow.

Khairkhwa was part of the official Taliban delegation that negotiated the final terms of the U.S. withdrawal.

“I started jihad to remove foreign forces from my country and establish an Islamic government, and jihad will continue until we reach that goal through a political agreement,” Khairkhwa went on to say at the summit.

Taliban fighters recently spoke with Al Jazeera, stating they were currently arranging to bring back leadership from Qatar after they secure the city of Kabul.

Taliban co-founder Abdul Ghani Baradar Akhund, among prisoners released by the Afghan government as a result of the February 2020 peace deal signed by the Trump administration and the Taliban, on Tuesday returned to Afghanistan for the first time in nearly 20 years, Yahoo News reported Wednesday,” Newsmax’s report said.

“Khairkhwa earlier this year assured the administration the Taliban would not launch a spring military offensive if Biden committed to removing all remaining U.S. troops. He also promised not to retaliate against any Afghans who worked with the U.S. military or the U.S.-backed government in Kabul,” the report continued.

There are reports emerging from Afghanistan that say Taliban members are going door-to-door to start delivering punishment to those who oppose the agenda of the terrorist organization, kill-list in hand.

Khairkhwa was once part of the Taliban’s interior ministry, being previously put in charge of both beheadings and stonings.

Obama originally celebrated Bowe Bergdahl as some kind of heroic “POWS, but it eventually came out that he was actually a deserter who plead guilty to this charge and was court-martialed.