Taking Things for Granted or With Gratitude? 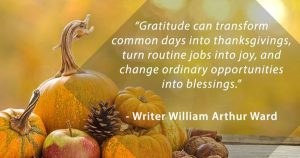 G.K. Chesterton, the great British thinker, theologian, philosopher and Christian apologist, was once asked to state the most important truth he had ever learned. He stated his answer in these words: “The critical factor in life is whether you take things for granted or take them with gratitude.”

In general, taking things for granted flows from an attitude of ingratitude. This attitude is due to a feeling that one owes no one, including God, anything. That what we have we owe to our on mental acuity and hard work.

Far too many Americans feel self‑sufficient. For the most part, today’s American believes that our strength is in and our trust should be in big government.  We believe that government somehow has the unlimited capacity that only God possesses.  When people reject the Lordship of Christ’s rule, they place their hope in an earthly ruler whom they expect to satisfy their wants. The people begin to see the nation’s problems as being political in nature rather than ethical, so they believe that they can steal by the ballot box what they are unwilling to work for.  This disastrous idea has resulted in government of the people, by the people and for the people, becoming government over the people in the name of the people.

Stop taking the gift of life for granted.  Someone calculated that the odds of your being born in this particular time, place and circumstance is about 1 in 400,000,000,000. It’s more likely that you will be hit by a lightning, voted the next US president, or win a Mega Millions Lottery Jackpot. That’s how precious you are. You happen only once, and even if you don’t particularly like yourself, or appreciate your authenticity, you truly are a precious, unique creation of life.

Stop taking the gift of liberty for granted. According to the Human Rights Foundation’s research, the citizens of 94 countries suffer under non-democratic regimes, meaning that 3.97 billion people are currently controlled by tyrants, absolute monarchs, military juntas or competitive authoritarians. That’s 53 percent of the world’s population.

Even though many of our most fundamental rights, to life, liberty and the pursuit of happiness, are under assault, America is still the land of the free. No other country in the world offers the freedoms we take for granted.

Stop taking the gifts of health, jobs, homes, food and water, and peace for granted. About 836 million live under extreme poverty, and 783 million lack clean drinking water. War and conflict have displaced 65 million from their homes.

Around the globe, about 815 million people — 11% of the world’s population — went hungry in 2016, according to the latest data from the United Nations.

“Thank God for dirty dishes; they have a tale to tell. While other folks are hungry, we’re eating pretty well. With home, health, and happiness, we shouldn’t fuss; for by this stack of evidence, God is very good to us!”

“On Thanksgiving Day, as we have for nearly four centuries, Americans give thanks to Almighty God for our abundant blessings. We gather with the people we love to show gratitude for our freedom, for our friends and families, and for the prosperous Nation we call home.

“As one people, we seek God’s protection, guidance, and wisdom as we stand humbled by the abundance of our great Nation and the blessings of freedom, family, and faith.

“I encourage all Americans to gather, in homes and places of worship, to offer a prayer of thanks to God for our many blessings.”

I close with the words of my dear friend, Dudley Hall:

What a great time to stop and give thanks. Our souls need a refreshing and our hearts long to be whole. But more than these, God deserves to be worshipped as the source of all blessings.

He has created us out of his love. He has rescued us from our sins. He has cleansed us from defilement, and he has set us apart as belonging to him for his purposes..

He has spared no expense to thrill us with his beauty. He has given of himself to make us partners in his field. He has amazed us with his mercy and called us into his love.

He has made us for each other. He has gifted us to be a blessing. He has set us in families both natural and spiritual. We are his body because he decreed it..

He enjoys our communion. He delights in our trust. His face of favor shines on us because he reconciled us to himself through his Son. He has given freely of his Spirit.

His love is unconditional. His grace is unlimited. His mercy is unimaginable. His knowledge is beyond understanding. His wisdom endures forever. He has given himself to his people.

All that we have or hope to have are gifts that come to us from his resources. We are saved by grace through faith and that is a gift of God. We have no rights apart from his graciousness and no claims on anything but death. It is time to give thanks.

He is the ultimate king and the present ruler over all the affairs of men and nations. He has paid the price of redemption, and everything paid for will bend to his will. The powerful may boast, but he laughs. It is time to give thanks.