Take This Job And Love It! 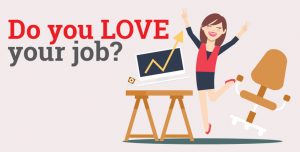 As we celebrate the “Labor Day” holiday, the truth of the matter is that most people in the workforce hate their work.  “A recent Gallup poll found that 77% of Americans hate their jobs.  Another poll found that Americans hate their jobs more today than in the past 20 years; fewer than half say they are satisfied with their current job,” Hugh Welchel recounts an incident of an arena filled with over 5,000 business people attending a motivational seminar.  When asked by the speaker, “If you went home tonight and found that a long lost relative had died and left you ten million dollars, would you be at work tomorrow?”, the halls echoed with a resounding “NO!” This is sad and funny at the same time, perhaps because misery loves company!  This is just an illustration of what all of us feel at some level. Is your work satisfying, fulfilling, joyful, meaningful, purposeful, difference-making, and commensurately profitable? Probably not most of the time, but all of us long for our labors to be so. According to the Bible, work was not always difficult, it will not always be so, and it doesn’t have to be so now.

Most cultures both ancient and modern view work as something to be shunned at all cost and something to be done by slaves, women and children. Only true Christianity has the proper perspective on work. A biblical worldview requires a biblical view of work: It is a blessing, not a curse, and we can use it to glorify God.

Why do we work? Most people work out of the demands of debt and not out of desire or design. Their theme song is, “I owe, I owe, so off to work I go.” Their oldie, but goodie song, is, “Sixteen tons of coal loaded and what do you get? Another day older and deeper in debt. Saint Peter don’t you call me cause I can’t go, I owe my soul to the company store.”

Work isn’t primarily for making money, it’s the best way to make men. God hasn’t called us primarily to make money. He has called us to work with Him in serving and sharing with others in such a way as to draw out their full potential in God. We are to labor with God in discipling and developing character skills and relationships with people that will pass on to the next age and over into the next world. The only thing that we can send over into eternity is investments made in people!

Success isn’t determined by where you work nor by how much you make, but by what you’re working for and how well you’re investing it in the work of the kingdom of God.

The late pastor, Myles Monroe, insightfully notes, “Our definition of work and God’s are very different. Work is not the same as a job. Work releases potential; a job provides a paycheck. While you may work at your job, work does not always result in a financial reward. Work arises out of a desire to contribute to the world’s wealth and well-being by giving of yourself. It moves beyond effort under the force of another and avoids the “I’m not going to work because you can’t make me work” mentality. Too many workers would rather get home than get ahead!

“Paul writes in Ephesians 4:28 that it’s not enough to stop stealing, but to labor so that we have something to give him who has need.

“Labor isn’t so much doing things as delivering hidden stuff.  It’s delivering the babies you will die with if you don’t work them into sight. It doesn’t matter what kind of job you have, whether you are an executive, a salesman, a factory worker or a housewife. Work as though your life depended on it, because it does.

“In Matthew 9:38, Jesus commanded us to pray for laborers. This term is also used to describe the process of a woman in childbear­ing. The process of delivering the pride and joy of a new baby—the hidden potential—involves conception, time, development, adjustments, labor, pain and cooperation. All are necessary for the manifestation of a child. This process is the same for all humanity. Labor delivers!

“Work is God’s way of revealing your talents, abilities and capabilities. It helps you to discover the satisfaction of ac­complishment and the results of perseverance. Every job, no matter how much you dislike it, is working for you. If you can educate yourself to work no matter what the conditions are, you will learn discipline, because the work is more important than the conditions. Work is also more important than the job. If a child always gets what he wants, he learns to expect his wants to be met without any effort on his part. Our world is full of adults who act like spoiled children. They never learned the value of work.”

There was a farmer who had expe­rienced several bad years with his crops who went to see the manager of his bank and announced, “I’ve got some good news and some bad news to tell you. Which would you like to hear first?”

“Why don’t you tell me the bad news first and get it over with?” the banker replied.

“Okay, the bad news is, with the bad drought we’ve had, coupled with runaway inflation, I won’t be able to pay anything on my mortgage this year, either on the principal or the interest.”

“Well, that is pretty bad.”

“It gets worse. I also won’t be able to pay anything on the principal or interest on the loan for all that machinery I bought.

“Wow, is that ever bad!” sighed the banker.

“It’s worse than that,” said the farmer. “You remember I also borrowed to buy seed and fertilizer and other supplies. Well, I can’t pay anything on the principal or interest that loan either”

“That’s awful and that’s enough! Tell me what the good news is, exclaimed the banker!”

“The good news,” replied the farmer with a smile, “is that I intend to keep on doing business with you.”

Dear reader, in spite of how bad we have been doing business with Father God, the good news is He still wants us to do business with and for Him!