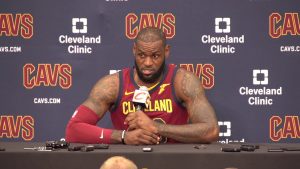 Ibrahimovic, who currently plays for AC Milan, an Italian club, stated that pro athletes should drop the politics and stick to what they are good at. The soccer star went on to say that he respects James and his skills on the court, but noted that his public political statements do not “look good.”

“[LeBron] is phenomenal at what he’s doing, but I don’t like when people have some kind of status, they go and do politics at the same time,” Ibrahimovic said. “Do what you’re good at. Do the category you do. I play football because I’m the best at playing football.”

“I don’t do politics. If I would be a political politician, I would do politics,” he added. “That is the first mistake people do when they become famous and they become in a certain status. Stay out of it. Just do what you do best because it doesn’t look good.”

James’ public activism has increased in recent years as the NBA star has become a vocal supporter for the Black Lives Matter movement. In May 2020 while reacting to the shooting of 25-year-old black man Ahmaud Arbery, James claimed that black men are “hunted everyday” in the United States.

This guy has the right idea. And not only should pro-athletes stop preaching politics, actors and others in the entertainment industry need to follow suit as well.

We don’t need to hear about who they voted for every five seconds or the agenda they support. Just go play pretend and make good art. Save the activism for your own life.