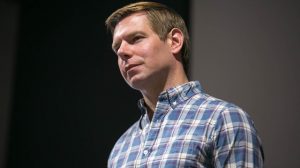 Rep. Eric Swalwell, a failed Democratic presidential candidate from the super socialistic state of California, who also happens to serve on the House Intelligence Committee, is refusing to answer questions concerning his relationship with an alleged female Chinese spy.

Intelligence officials are saying that the woman in question has had romantic relationships with several Midwestern city mayors.

Fang Fang, also known as Christine Fang, a Chinese national believed to be working with China’s Ministry of State Security, conducted an extensive political influence operation between 2011 and 2015 on behalf of the Chinese Communist Party in the Bay Area and elsewhere, according to a report by Axios, which cited U.S. intelligence officials.

In a Tuesday interview with Politico, the outlet reported that “Swalwell refused to discuss his relationship with Fang, although he did say the controversy was not going to cost him the Intelligence Committee seat.”

“As the story referenced, this goes back to the beginning of the last decade, and it’s something that congressional leadership knew about it,” the California congressman said.

Fang, thought to be in her 20s or 30s back then, attended California State University East Bay and used her leadership positions in the Asian American community to expand her influence, using her political ties to place potentially unwitting “subagents” in the offices of elected officials, the Axios report said. Fang’s relationship with the two mayors seemed to fit the description of a “honey trap” where sex is used for ulterior purposes, like political connections or potential espionage.

Among the Chinese national’s “most significant targets” was Swalwell, according to the Axios report, which said Fang “took part in fundraising activity for Swalwell’s 2014 re-election campaign” as a “bundler,” although the political operative who was a source for the story said they “found no evidence of illegal contributions” and the Federal Election Commission does not show Fang making donations in her name. Fang “helped place at least one intern in Swalwell’s office” and “interacted with Swalwell at multiple events over the course of several years,” the report said. Fang began targeting Swalwell when he was still a Dublin City, California, councilman before he was elected to the House in 2012.

Tucker Carlson took up the story on Tuesday night and stated that “U.S. intelligence officials believe that Fang had a sexual relationship with Eric Swalwell.”

“We asked Swalwell’s office about that directly today,” the Fox News host said. “His staff replied by saying they couldn’t comment on whether or not Swalwell had a sexual relationship with Fang, because that information might be, quote, classified. They did not elaborate or explain what they meant by that.”

Swalwell is doing his best to try and duck any sort of questions concerning his relationship with Fang, which is probably a good indication that he had some sort of inappropriate connection with her.

If that turns out to be the case, he needs to be removed from the House Intelligence Committee as soon as possible, seeing as how he’s a potential risk for leaked information. Oh and that he’s a pretty easy target for foreign female spies.