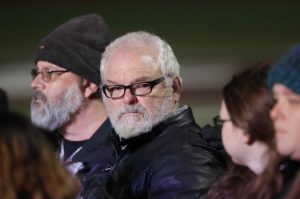 Steven Willeford, an NRA member and trained firearms instructor, just happened to be across the street when a madman opened fire on a small church in the middle of Sunday services.

Barefoot, he ran out into the street, his AR-15 in hand, and flagged down a stranger who assisted him in following and taking down the gunman.

The media largely ignored him, focusing instead on the “thoughts and prayers aren’t enough” narrative.

They quickly turned away from the Sutherland Springs shooting story as soon as it came to light that the gunman, just like Nikolas Cruz in Parkland, should not have legally been allowed to possess a firearm, but, just like Parkland, law enforcement failed.

Not only that–but in this case, they couldn’t possibly blame the NRA, since Steven Willeford, the hero of Sutherland Springs, was trained by the NRA to take down active shooters.

This week, Willeford penned an op-ed in the Dallas News defending the NRA and welcoming them to Dallas for their annual convention, noting the unfair blame they have received as of late for gun violence in America.

Not everyone in Dallas has welcomed NRA members ahead of this big event. Anti-gun politicians and anti-gun activists have made clear their belief that the way to stop criminals is to restrict the rights of law-abiding citizens, and many have blamed the men and women of the NRA for acts of deranged individuals. Sometimes, it feels like the mainstream media hates firearms.

He went on to explain that shooting was a cherished pastime in the quiet community of Sutherland Springs, where his family has lived for four generations. Members of the community see it as their duty to keep their families and neighbors safe.

When his daughter told him there was a shooter across the street from his house on November 5, 2017, he “feel back on his NRA training”, grabbing his AR-15 and running out into the street without even thinking.

Men like Willeford are the people who would be restricted by increased gun regulations, he argues.

A lot of gun control groups out there talk about restricting gun rights, but criminals don’t obey laws. Those restrictions only affect law-abiding gun owners like me. They do nothing to increase public safety.

There is no other organization in the world that promotes the safe and responsible use of firearms more than the NRA. The organization has more than 100,000 instructors across the country teaching affordable classes where law-abiding gun owners can learn how to shoot and care for their firearms in the safest possible way. The NRA offers programs such as Eddie Eagle, which teaches children what to do if they encounter a firearm: stop, don’t touch, run away, tell an adult. The NRA hosts competitions across the country that promote and reward marksmanship and safety. The NRA is, first and foremost, a firearms safety organization.

I have been saddened to see politicians demonize the men and women of this organization lately. It’s an organization that taught me a great deal and of which I’ve been a proud member most of my life.

If the Parkland kids’ perspective matters so much, then why doesn’t Willeford’s? Here is a man who was directly affected by one of the worst mass shootings in our nation’s history, and yet he advocates for less gun control, and considers the NRA an organization that helps prevent violence, rather than perpetuates it, as the Parkland survivors and their media handlers would have you believe.

“I personally want to welcome the visitors expected for the NRA’s Annual Meeting,” Willeford concludes. “This is a time for all of us to come together to celebrate our nation’s freedom. People will be coming from every city, state and town in the United States. They will come with one anthem: we are the NRA!”