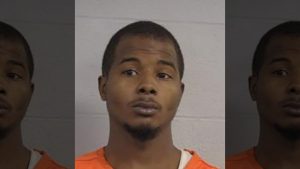 The Louisville Police Department announced on Thursday that they made over 100 arrests during the explosion of rioting, looting, and protesting that occurred after it was announced the officers involved in the shooting death of Breonna Taylor would not be charged with a crime.

Two police officers were shot during the mayhem, however, a suspect has now been arrested in connection with the incident. Larynzo Johnson, 26, has been charged with wanton endangerment and assault of a police officer and is due to be arraigned on Friday.

Shots rang out when Louisville police officers were conducting crowd control operations at Broadway and Brook Street “in response to a large crowd that had set fires, caused property damage and failed to disperse after being warned,” according to the post-arrest complaint filed in Jefferson County.

The complaint said he was also in possession of a handgun at the time of his arrest and law enforcement recovered video of the shooting showing the suspect fire at officers.

Being a police officer is the most dangerous job in the world. The last thing our officers need is more on their plate to worry about, but thanks to the anti-cop sentiment that’s being spread all over the country by the mainstream media who are desperate to cause chaos and use it as a political weapon, there’s more to be concerned about than ever before.

Cops willingly put themselves out there to help protect our communities. The vast majority of them are good people. It’s sad to see these people worry and wonder every day if some racist is going to come out and pop them while they are trying to keep the peace.