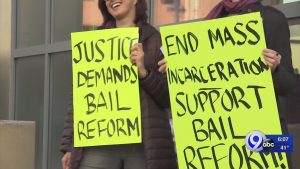 News flash! If you make punishments for serious crimes more lenient, chances are folks are gonna just go ahead and commit more crimes.

You’d think it’d be obvious, but the fine folks in government in my home state of New York apparently didn’t take their smart pills at the end of the year when they passed a budget including sweeping bail reform that now allows hordes of criminals to walk free with an appearance ticket and, if they’re lucky, gift cards and Mets tickets.

So, imagine my surprise when I see the headlines today, telling me that NYPD Police Commissioner Dermot Shea announced that crime had skyrocketed since the reforms were enacted with the new year.

“Since 2020 began, as of Friday at midnight, robberies are up 32.5 percent, car theft is up 61 percent and burglaries are up 18 percent compared to the same time period last year,” Shea said in a Friday press conference according to the New York Post. “And the numbers aren’t fractions either—a total of 233 more robberies have happened this year compared to last, 159 more car thefts and 125 more burglaries, just in the last three weeks.”

Y’all, I know it’s New York, but those numbers are crazypants.

Crime has literally exploded, and as much as the Dems want to call it “fearmongering,” we need to change this ridiculous law.

In the first three weeks of this year, we’re seeing significant spikes in crime. So either we forgot how to police New York City, or there’s a correlation. If you let out individuals that commit a lot of crime, that’s precision policing in reverse and we’re seeing the effects in a very quick time, and that is why we’re so concerned.

People say it just took effect, you can’t have consequences already. Take a look at the comp stat. We’re seeing it immediately at the same time that you have [state and local jail] populations dropping significantly. Now don’t tell me there’s not a correlation to that.”

You have to have a situation where dangerous individuals, or individuals that repeatedly commit crimes and victimize people, are kept in. And if judges don’t have that ability, I think we’re all in trouble, and I don’t think any New Yorker wants that to happen.

Shea also pointed out the new discovery laws, which allow alleged criminals to get the names, addresses, and phone numbers of complainants and return to the scene of the crime to gather evidence (yes, seriously,) which he says need to be changed immediately:

“The second piece is going to take longer and then it’s going to be a one-two punch as discovery takes hold. Discovery is going to change how crimes are prosecuted in New York. … When you have instances where witnesses and victims will be afraid to call the police, that is a real problem and that needs to be fixed… this is something that affects all New Yorkers.”

Thanks to King Andy Cuomo and the Dem-controlled legislature, nearly 20% of New York’s prison population has been freed.

Having fewer people crowding our prisons may sound like a good thing, except for the fact that this includes child molesters, drunk drivers, and attempted murderers. So, that’s fun.

“Department of Correction statistics show there were a total of 5,569 people in city jails on Thursday, a 19% drop from the 6,877 counted on Nov. 21,” The New York Post reported. “Despite freed defendants getting busted for more alleged crimes — including accused bank robber Gerod Woodberry and alleged anti-Semitic slapper Tiffany Harris — Gov. Andrew Cuomo didn’t mention bail reform during his annual State of the State Address and legislative leaders aren’t making any moves to change the law.”

Get me off this ship of fools, y’all.