Supreme Court Shoots Down Atheists’ Attempt to Take ‘In God We Trust’ Off U.S. Currency 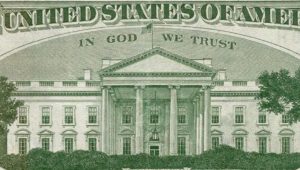 The United States Supreme Court has dashed the hopes and dreams of angry atheists all across the United States after shooting down their attempt to have “In God We Trust” removed from U.S. currency.

If you listen closely, you can almost hear them all stamping their feet and bawling like toddlers because they can’t force their religious views down on the rest of us, which ironically is what they accuse Christians of doing all the time. That, folks, is called hypocrisy.

via the Daily Wire:

The phrase, which has become the national motto, was first stamped on a 2-cent U.S. coin in 1864 and was officially added to both coins and paper money in 1955 after Congress passed legislation.

The high court on Monday declined to take up the case, which means the finding from the last court to hear the case stands. The 8th U.S. Circuit Court of Appeals dismissed the case in 2018.

The case was brought by Michael Newdow, an activist who also sought to scrub the phrase “under God” from the Pledge of Allegiance. He had argued that Congress’ decision to put the phrase “In God We Trust” on currency violated the First Amendment because it was tantamount to a government endorsement of religion.

Most atheists try to argue their case based on the Establishment Clause of the First Amendment, proving they have no earthly idea what this actually means. While it says, “Congress shall make no law respecting an establishment of religion,” the actual intended purpose of the clause was to prevent the state from backing one particular denomination of Christianity and adopting that as the “official” church of the United States.

Guess these atheists don’t know their American history all that well, do they?

“The lawsuit also argued that the phrase violated the Fifth Amendment’s due process clause and the 1993 Religious Freedom Restoration Act because it forces ‘Petitioners (who are Atheists) to bear and proselytize that Montheistic message,'” the Free Beacon reported.

Representing clients and groups that identify as atheist, Newdow said that “by mandating the inscription of facially religious text on every coin and currency bill,” the U.S. government turned his clients into “political outsiders on the basis of their fundamental religious tenet.”

One of the signers of a petition about this topic is a child. Check out what this poor kid said:

The 8th U.S. Circuit Court of Appeals said the phrase doe not compel citizens to engage in religious observance, and thus, by SCOTUS refusing to hear the case, they uphold that ruling.

With all of the crazy things that need fixed in our country, this is what atheists are focusing on. It’s pathetic to say the least.