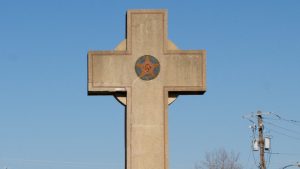 The Supreme Court has ruled against a constitutional challenge made by angry atheists over a cross-shaped war memorial located in the state of Maryland, saying it does not violate the First Amendment.

You can almost hear all of the “God haters” screaming at the top of their lungs as they have once again failed to silence the impact of religion in the public square.

Isn’t it funny that a group of individuals who claim to be “free thinkers” who hate when people force religion on them, yet that is precisely what they try to do with their own beliefs?

Justice Samuel Alito delivered the opinion for the Court, with a total of seven justices finding that the memorial — known colloquially as the Peace Cross — should be upheld. Justices Ruth Bader Ginsburg and Sonia Sotomayor were the two dissenters.

“After the First World War, the picture of row after row of plain white crosses marking the overseas graves of soldiers who had lost their lives in that horrible conflict was emblazoned on the minds of Americans at home, and the adoption of the cross as the Bladensburg memorial must be viewed in that historical context,” Alito wrote.

“It has become a prominent community landmark, and its removal or radical alteration at this date would be seen by many not as a neutral act but as the manifestation of ‘a hostility toward religion,’” he added.

A three-judge panel of the 4th U.S. Circuit Court of Appeals found that the Peace Cross impermissibly endorses Christianity. The so-called “reasonable observer” test provides that government displays that are perceived to endorse or disparage a particular religion violate the First Amendment.

Isn’t it shameful that this is even a topic up for debate in our country? Years and years ago this would’ve been a non-issue. No one would’ve cared, having embraced the symbolism the cross represents and just moved on with their lives.

But no, the atheist, much like any other radical, wants to force his beliefs down your throat using the power of the federal government. THere’s no room for religious beliefs in public according to these people. You know, except their religious adherence to the tenets of humanism and science of course.

The irony seems to be lost on these folks.